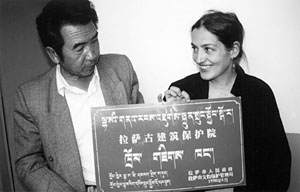 This project took place in Lhasa 1996-2000, as a cooperation between the Lhasa City Cultural Relics Office and THF. Under the direct chairmanship of the then-mayor of Lhasa, Lobsang Gyentsen, the two partners jointly organized the upgrading of historic homes in Lhasa's Barkor districts. Upgrading of infrastructure in this area was also started at the time, later continued by the Lhasa municipality on their own with central government funding. 93 historic buildings were placed under protection. 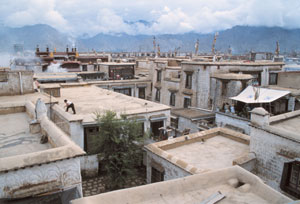 300 Tibetans took part in the vocational training programme to train artisans specializing in the traditional skills, but also training of surveyors, plumbers, electricians and project managers. In the end not all 93 buildings could be preserved and upgraded, since the control over the old town shifted away from the Cultural Relics Bureau to the Construction Department. Today, only 50 historic residential buildings remain, which for such an ancient city as Lhasa is a great loss.

The inner Barkor neighbourhood is preserved, and still inhabited by the original community, even if on the outer Barkor tourism-related businesses are rapidly taking over most of the buildings. In 2004, the project was given best practice status by the United Nations Human Settlement Programme (UN Habitat).

The methodology developed for the Lhasa Old Town Conservation Project, and the results and experience gained, have since been applied to similar projects in China's Sichuan and Qinghai provinces, in Mongolia and in India's Ladakh region, as well as giving inspiration to projects elsewhere in Asia. 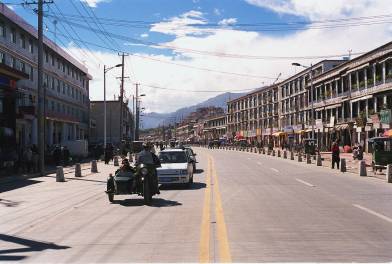 Since 1993, we have created a database of historic buildings in Lhasa, which has since become a very important tool for our conservation work.
The database and information on more than 100 buildings can be directly accessed, or via interactive maps of Lhasa's old city, Potala and Lingkor areas. The maps can also be downloaded and printed-out. The Image Gallery has a number of panorama pictures, and maps of Lhasa and the old town. The basic structure of historic Tibetan buildings is explained under the Architecture Menu.

For current projects, please refer to our China and Ladakh sections.