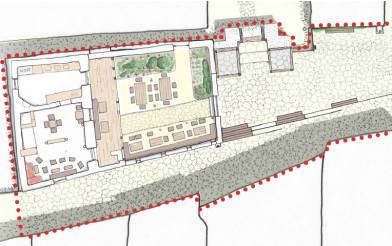 In 2017, Mathias Neitzel and Yutaka Hirako made a conservation design plan for Naushar square, located in front of the 19th century Tehsildar gate, built by Tehsildar Basti Ram Thanedar. This was restored by THF in 2008 with Katrin Krause and Maike Völkel planning and implementing the work, together with the 2008 THF/LOTI team.

The ‘Naushar Square and Tehsildar Tea House Redesign proposal’ and conservation plan was designed as a public space based on research, observation and interviews conducted between July and October 2017. The local inhabitants opinions, visions of the space and use were the most valuable source of information.
According to Neitzel and Hirako “The (Leh) Main Bazaar is not what you look for, there are no public spaces that offer the opportunity to sit down in a calm and at the same time inviting environment. There are indeed calm and inviting places but none offer their qualities without monetary restrictions (e.g. restaurants, cafes) and most of them are designed for tourists rather than locals. Even though there are several sites throughout the inner city of Leh that offer potential to be such a public space, Naushar Square stands out due to its location, function and undoubtedly high potential”.

In 2018, THF/LOTI proposed the “Naushar Square and Tehsildar Tea house – Re-design proposal” to the Tourism Development Authority (TDA) of Leh. The proposal was sent to Jammu & Kashmir secretary of Tourism via TDA, Leh for approval. The project was approved and implemented by the TDA contractor with slight modifications.