Beijing is one of the world’s oldest functioning centrally planned cities. The historic inner city, dating back to the Yuan dynasty (1279-1368) is organized in a grid pattern. The horizontal lanes are known as hutong (胡同). The housing, restricted to be single-storey only until the end of the Qing empire, is organized around courtyards. The buildings themselves are built from the 'blue' bricks and rooftiles characteristic for northern China.

Most courtyard houses (si-he-yuan in Chinese, 四合院) were transformed into public housing in the 1950s, and today they are overcrowded and dilapidated, and lacking in infrastructure.
As a result of Beijing’s rapid urban re-development on a massive scale, many of these ancient structures have been demolished in recent years. But an intense discussion about the future of old Beijing has been raging in China’s capital for quite some time. The government has belatedly placed several areas under protection, since continued reckless demolition would be detrimental to the preservation of China’s cultural heritage. Yet rehabilitation concepts (beyond turning them all into bars and restaurants) are lacking. 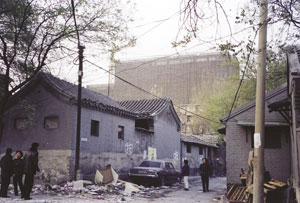 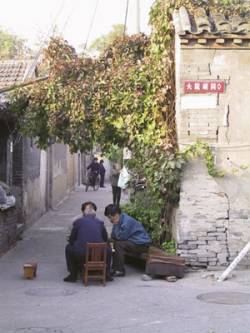 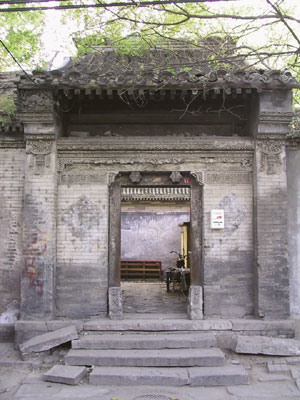 Since 2002, in co-operation with Tsinghua University School of Architecture and local city management departments, THF has studied several Hutong neighbourhoods in great detail, looking at both architecture and social conditions. THF was reminded of conditions not only in Lhasa in the 1990s, but also of similar housing conditions in East Berlin, Moscow and St. Petersburg that some of us had experienced first-hand. According to our surveys, the majority of residents actually praise the life-quality of Hutongs in terms of social relations with their neighbours (developed over decades of having to live together in small spaces), security, greenness, quietness and, of course, the convenient location in the centre of Beijing. 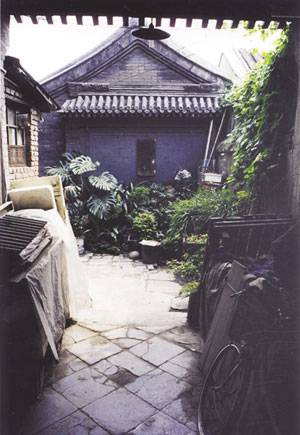 There is also great beauty to the Hutong lanes, specially the view of huge areas of tiled roofs and trees.
The debate over the future of old Beijing deeply interested THF. Would it be possible to apply the participatory rehabilitation approach that we had developed in Lhasa to the Beijing Hutong?

Together with students from Tsinghua University, we spent two years carrying out a detailed study of three areas in Beijing, complete with architectural documentation and social surveys (“Beijing Hutong Study”, published in 2004).
We also developed pilot projects for rehabilitation of multi-family public housing. 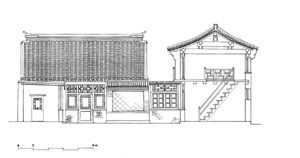 Our published study (bi-lingual in Chinese and English

) was introduced at a conference jointly hosted by Tsinghua and the embassies of Germany and France. Since then it has been widely distributed among Beijing municipal planning and housing departments. Even though our impact on this huge and ancient yet-so-quickly-changing city has been small, we have been happy to note that recently, the Housing Department has begun to rehabilitate some courtyards in a fashion similar to the one that we have been proposing. 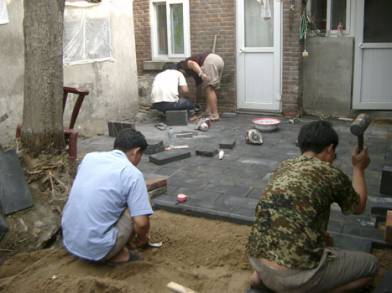 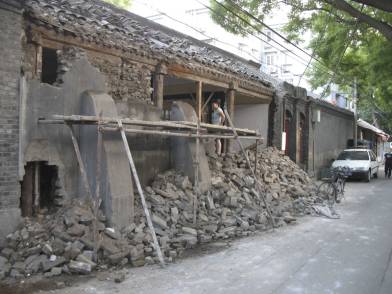 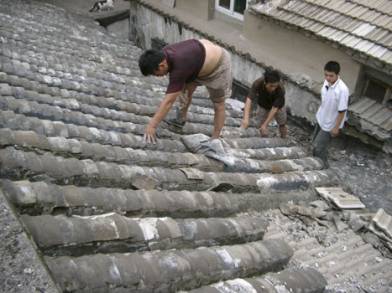 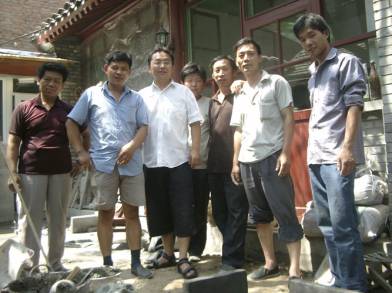 Each site represents one of three main types of ownership in the Hutong lanes: public housing, private property and work-unit housing. The work that was carried out included replacement of damaged building parts, upgrading of drainage facilities, courtyard paving and restoration of historic elements and facades. At the private and work-unit sites, the owner/occupier contributed part of the costs, and supervised the work together with THF’s team. Work on the public courtyard was co-financed by the Housing Department.

All residents continue to live in their upgraded house and are responsible for future maintenance.
The project achieved to simultaneously promote community–driven preservation and to raise awareness of the highly endangered urban heritage and their living communities in time for the Beijing Olympics in 2008.

In our opinion, the solution for rehabilitation of historic Beijing lies in micro-management, at the level of individual courtyards within a larger framework set by the government. We therefore cooperated with the government and created a pilot project from grass root level, to show that there are better ways to keep Beijing’s old quarters and let the original residents stay. The project aimed not only to preserve the old Hutong structures and historic buildings, it was equally important to keep the residents and improve their living condition; and protect their housing rights instead of relocation. Such a pilot project can have a very important model character all over China.

This project was supported by MISEREOR. 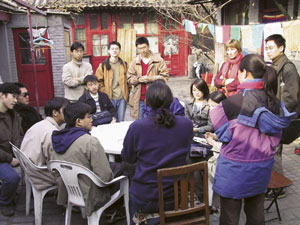 Thanks to the Tsinghua U. participants:
Tsinghua University School of Architecture
architect/instructor Mr. Zou Huan