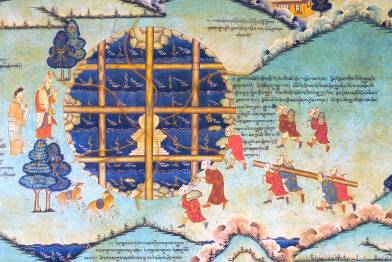 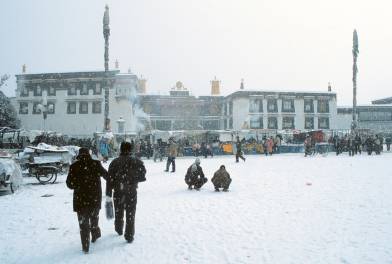 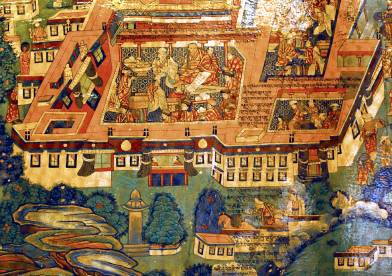 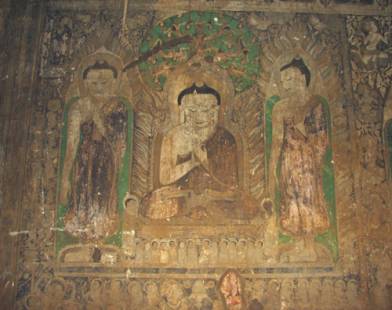 Around the year 639 AD, foundations were laid for one of the first Buddhist temples in Tibet, the Lhasa Tsukla-khang (originally known as the Rasa Trülnang, and today known to Westerners as the Lhasa Jokhang and to Chinese as Dazhaosi). This building is partly preserved and still functioning as a Buddhist temple. In 2000 it was added to the World Heritage List as part of the earlier Potala Palace inscription. THF has carried out a detailed investigation of this building during our Lhasa Old City Conservation Program. Architectural and art historical evidence suggests that the Lhasa Jokhang originally was almost entirely based on Indian building traditions (see Temples of Lhasa and Alexander 2006 Lhasa Jokhang History). Only a handful of other monuments from the Tibetan empire period (7th – 9th centuries) have survived. These imply that Tibet absorbed additional Chinese and Central Asian influences when more temples were built. The most prominent example of such influence is the Gyapi, the "Chinese canopy roof" that is often erected above sanctum chapels (see Liang Si-cheng's fascinating Pictorial History of Chinese Architecture).

By the 11th century, the evolution of Tibetan sacred architecture appears to have been firmly imbedded in a context of Inner Asian cultural exchanges (for example, see Klimburg-Salter & Allinger (eds) 1998, Buddhist Art and Patronage).

With the fall of Indian and Central Asian Buddhist civilizations (particularly 12th century onwards), this multicultural milieu began to dissolve. Tibetan sacred architecture reached its maturity in relative isolation, perhaps as late as the 15th century. Reversing the earlier flow of ideas, Tibet became a major influence on Buddhist construction across continental Asia.

The early evolution of Tibetan Buddhist architecture until it reached maturity is still insufficiently understood. The Cultural Revolution (1966-1978) has unfortunately eliminated all but a handful of early temples in Tibet (early Chinese temples were also decimated. Therefore, study and documentation of early Tibetan sites is vital to any progress in our understanding of the genesis of Tibetan sacred architecture.