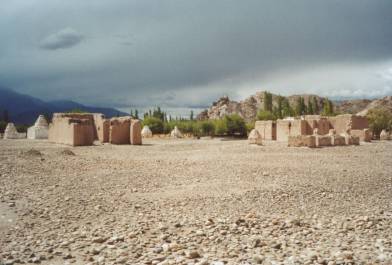 The monastery of Nyarma is situated in the Indus Valley South of Thiksey monastery. It is considered to be the third major foundation of the “Great Translator” (Lotsawa) Rinchen-zangpo, who initiated its construction around the year 1000 AD. It was the centre of the Buddhist faith in this area of Upper-Ladakh (Margyul), which by that time was under the influence of the kings of Guge and Purang. These kings of western Tibet were the most important and effective patrons of the renewal of Buddhism in Tibet. 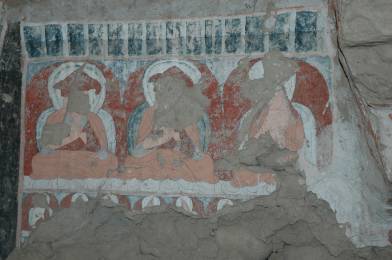 Today, the former splenderous monastery is in ruins. It consists of five temples and more than a dozen of stupas. It was once surrounded by an almost rectangular wall, which had turned the complex into a compound or sacred enclosure (choskor). Its current state of condition is probably due to the fact, that the roofs of the temples had been taken away about 150 years ago. There is evidence, that this had been carried out local people in order to recycle the wooden parts of the constructions, probably after the compound had severly suffered to an unreparable extent from the muslim Dogra invaders.

Since that time all the remaining decorative pieces of art (murals, votiv stupas, sculptures and plastics) have been exposed to wind and weather and faded away slowly. Today only remains of halos are left in the former Assembly Hall (Dukhang) of the Main Temple. Some murals though could survive inside a stupa in the western part of the compound. These are to only survivers of the former art of Nyarma inside the compound.

Accordingly David Snellgrove, who visited the site in 1974/75 called the temples “empty shells”. The Dukhang of the Main Temple was even used as a shelter for goats and zongs for a while.

Outside the compound sevral rows and groups of stupas can be found. On the eastern hills a small eremitage (Ensa) claims a spectaculare position. It is surrounded be a stupa wall. In the North of the compound the ruins of a castle is a reminder on the the times of wars and on-going invasions, which finally caused the eclipse of those Buddhist sites which had been built in situation difficult to defend, such as the case Nyarma. 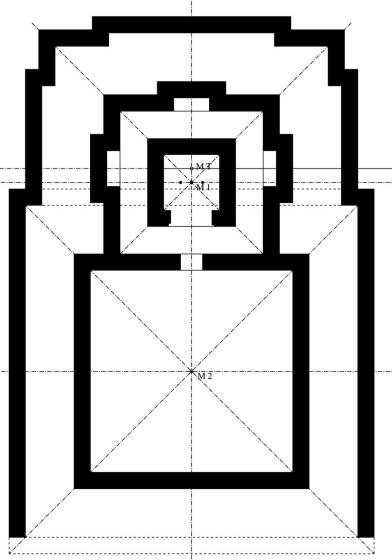 During the last decades some building activity was carried out. Upon the walls of the Cella of the Main Temple a small nun temple (Jomo Lakhang) was errected. In addition to that a rectangulare room was attached to the external ambulatory of the Main Temple, which was used as some kind of class room for educational purpose. In 2003 another phase of construction startet. Right in the middle of the site another temple was going to be situated. It is still under construction. While the elder Jomo Lakhang fits quite well into the existing architectural frame, the latest foundation is disturbing the order of architectural elements severly.

Despite of all the changes the site of Nyarma still provides a lot of highly important informations for the understanding of the architecture and spatial conceptualisation of the early phase of Tantric Buddhism.