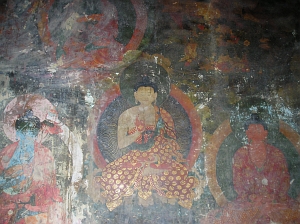 The temple of rDzing phyi, located in the homonymous village of the valley of ‘Ol kha, in Zangs ri county, Lho kha prefecture, is a little known religious structure whose origins go back to the early period of the second spread of Buddhism in Tibet (bstan pa phyi ‘dar). It was founded in the mid 11th century by a Gar mi yon tan g.yung drung, a disciple of dGong pa rab gsal, the famous lama responsible for the revitalization of Buddhism in Eastern Tibet. dGong pa rab gsal is said to have exhorted Gar mi yon tan g.yung drung to build a temple in order to spread the doctrine in dBus and gTsang, and to have given him as a support of meditation a statue of Maitreya. This statue originated in the country of Li (Khotan), and had generated itself (rang byon) three times, first in crystal, then in sandalwood and finally in a brass-like alloy (ji khyim). The statue became the main support of the temple, which was built, according to a prophecy Gar mi had received, “behind the yonder pond” (rdzing ma gi’i phyi tsam du). Thus, the temple takes its name by its location as indicated in the prophecy. 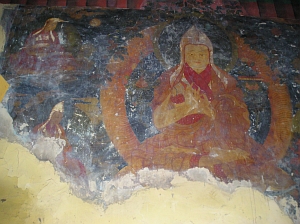 Nowadays most Tibetans know of rDzing phyi because of its connection to Tsong kha pa, the famous saint and reformer of Tibetan Buddhism. In fact, it is said that the temple eventually reached such a state of decay and abandonment that it attracted the attention of Tsong kha pa, who, in 1393, conducted there a series of important restorations. These included the making of new statues as well as mural paintings; the majority of the artists is said to have come from Yar lung, but Tsong kha pa himself is recorded as having made drawings, as well as consecrated all the new images. Successively, rDzing phyi seems to have become involved in the power struggles between dBus and gTsang. It is probable that its particular geographical position contributed to this involvement, since we know that the whole area of ‘Ol kha was already contested between Phag mo gru pa and ‘Bri gung pa at the time of Byang chub rgyal mtshan, and that successively, in 1537, the dGe lugs pa lost the valley of ‘Ol kha to ‘Bri gung. Clearly rDzing phyi did not survive unscathed all these struggles, and one particular incursion left the temple severely damaged. New restorations followed, restoration that this time involved another major personage of Tibetan history, the Fifth Dalai Lama Ngag dbang blo bzang rgya mtsho, who is said to have acted at the same timeas donor and officiating cleric (mchod yon) following an exhortation of the abbot of rDzing phyi himself. This second renovation produced a whole new set of wall paintings in the temple, and also re-organized and catalogued all the holy objects contained therein. Last but not least, rDzing phyi is remembered as the birth-place of the Twelfth Dalai Lama, who was born there on December 27, 1856. 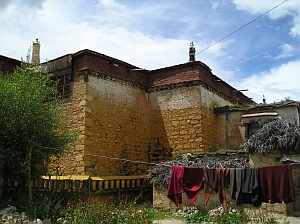 On a visit to rDzing phyi in August 2004, I found the temple still in use and hosting five monks, including the abbot. The interior of the temple is composed of a portico with a small antechamber, a main chamber (dri gtsang khang) with twenty pillars, a Maitreya temple (Byams pa lha khang) with four pillars, and a chamber dedicated to the Twelfth Dalai Lama on the roof-top. While the Byams pa lha khang’s walls are bare and merely covered (recently) by white plaster, the dri gtsang khang still displays a good portion of what is, probably, the 17th century wall paintings done at the time of the Fifth Dalai Lama. These exquisite wall paintings are among the few examples of original, pictorial art that I have seen in Central Tibet, since they do not show signs of attempts to restoration. Still, they are damaged, in some portions extensively, by the infiltration of water from the roof. On the contrary, the statues and all other implements, including the most venerated support of the temple, the three-times self-generated statue of Maitreya, are all modern and remade. This was already documented in K. Dowman’s The Power Places of Central Tibet, who reported that only the feet of the Maitreya statue are original, a piece of news which was also repeated to me from the abbot. 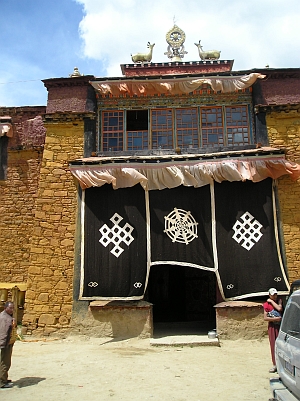 rDzing phyi became the object of my research on occasion of the preparation of a thesis at the University of Rome. The main source for my thesis, and for the brief history of rDzing phyi outlined above, is the guidebook of the temple, an anonymous seventeenth (?) century text entitled ‘Od dga’rJing Phyi dga’ ldan gling gi gnas yig dpag bsam snye ma gzhugs so. The text was copied in situ for Giuseppe Tucci in 1949, and that copy is now preserved in the Tucci Fund of the library of the Istituto Italiano per l’Africa e l’Oriente (Is.I.A.O). The text and translation of the guidebook have been published by Is.I.A.O. in the Serie Orientale Roma (S.O.R. XCV).