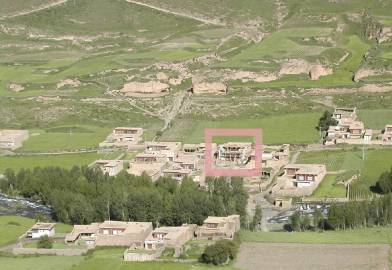 Yundrungling (g.yung drung gling) is located at Qukar Gongnong village 20km west of Ganzi town in Ganzi Tibetan Autonomous County in Sichuan Province, China. It is the only Bön temple in the valley, and one of only two such sites in Ganzi county. Its history is not documented. According to the tradition preserved by the caretaker, previously there has been a reincarnation lineage in charge of the monastery that ended with a lama called Gongpur Wuja.

Until 1966 Yundrungling was a true monastery, with seven to eight monks staying in surrounding village buildings. It was then used as granary until the mid-1980s, and then stayed empty until 1996.

During the Cultural Revolution all statues in the main building have been destroyed. The former monks quarters are now village houses. But the main building with its old mural paintings and wooden structures is preserved. 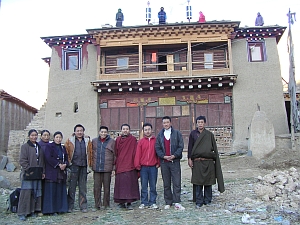 THF’s first visit to Yundrungling was in May 2002, soon after the start of the Beri monastery project. During an investigation of architectural monuments in neighboring villages, the THF team consisting of André Alexander, Pimpim de Azevedo, Nyima Tsering, Lobsang Ngudup and Ms Chökyi found here historic murals on ground and upper floor, and exquisite carvings on the timber frame. The team also noticed that the building had suffered from water-leaks for some time, caused by the poor condition of the roof. We took only few photos, thinking to come back at a later time, but copied most inscriptions on the paintings.

In July 2002, after a night of heavy rain, the central part of the roof collapsed, destroying parts of the upper floor‘s inner north wall with its wall paintings.

The next morning, caretaker monk Tsewang, who had only recently begun his term, came to THF asking for help. Our team began to implement emergency measures to prevent the whole roof of collapsing. A waterproofing structure of plastic foils and supporting pillars was erected, since the core of the building lay exposed to the elements.

With the advice of the Lhasa master builders Pala Migmar and Olo Chunchun, THF prepared a conservation plan. July 2002 marks the start of the project. 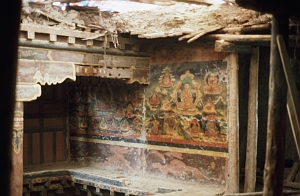 The timber frame suffered from deformation and settlement. This was corrected. The roof beams were suspended with simple car hydraulics, and eight pillars around the skylight area were re-erected in correct balance. One pillar was entirely replaced. The base areas of the eight pillars had been damaged by rot, this was cut off and the pillars were placed on flat stones. This prevents future water infiltration from the ground.

The leaking roof had already caused substantial damage to the timber frame, and was the prime cause of the collapse. Therefore, on the upper floor, most of the remaining timber frame elements had to be replaced. 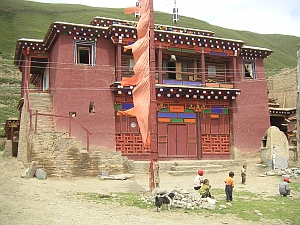 During the process of structural restoration of Yundrungling monastery, the interior wall paintings were covered with a removable layer of Japanese paper, and edges fixed with gaze and glue for protective purposes by two Italian restorers. After the completion of the structural works in summer 2004, German restorer Christine Schmaltz-Jürgens removed these security layers and prepared a detailed analysis of the paintings and damages. She then developed a comprehensive conservation treatment (a detailed report as PDF-File is available for download).