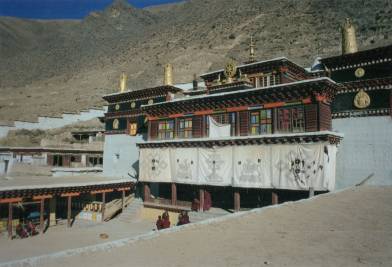 Kardze is a mountainous area, characterized by steep and narrow river valleys. The architecture of Kham is directly related to that of central Tibet, given the similarities in culture and climate. The average height of settlements is above 3000 meters, with high mountain peaks above 5000 meters. Compared with the central parts 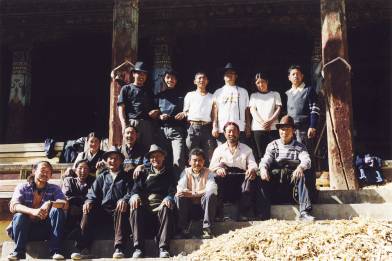 of the Tibet Autonomous Region, the Kardze Autonomous Prefecture is much more forested, and the greater availability of wood is reflected in the architecture. Kardze differs in dialect from Lhasa, but the written language is standard Tibetan. Under the Western Development Program launched in recent years by the Chinese government, transportation and communication links between the different parts of Sichuan province are currently subject to major improvement works. These have greatly reduced the time it takes to reach Kardze from the provincial capital, Chengdu.


Economy and Culture in Kardze

Farming, animal husbandry and trading are the traditional occupations, and the area is also renown for its painting and silver work traditions. Tibetan Buddhism is the predominant religion, with all four major denominations (Gelukpa, Sakyapa, Karma Kagyu and Nyingmapa) represented by monasteries. According to official statistics, there is only one monastery of the indigenous pre-Buddhist shamanist Bön religion in Kardze county, but THF discovered a second one (see Yungdrunglingreport ). 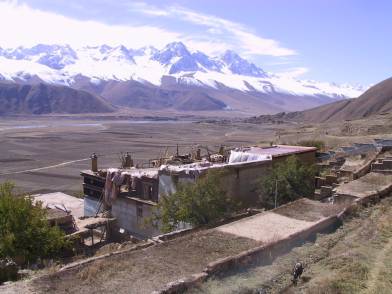 Beri Monastery is located west of Kardze town, along the road leading to Dege town.

It was founded in the 17th century, in the wider vicinity of a number of much older temples, Sakya-pa and Karma Kagyu sites that were established during the Yuan dynasty. A disciple of the Fifth Dalai Lama by the name of Ngawang Puntsok established 13 monasteries in the region to promote the Gelukpa order. Beri was built on the site of an older hermitage known as Gela Daden. The monastery was enlarged in the 18th century by a local doctor called Ngawang Yeshe. The Sixth Panchen Lama Lobsang Panden Yeshe (1738-1780) consecrated the extended chapel, and the Qianlong emperor sent a wooden board with his own calligraphy. Ngawang Yeshe became the first Geta (dge stag) Lama, an incarnation line that still continues today. The Fifth Geta Lama assisted the Red Army when they passed through Kardze while on the famous “Long March”. As a result, Beri monastery was spared destruction during the Cultural Revolution. It did suffer from complete lack maintenance for two decades. Today the monastery has the official status of protected monument at provincial level. Current head of the monastery is the Sixth Geta Lama.

Beri is a typical monastic complex with a main building containing assembly space and chapels, surrounded by residential buildings and a kitchen contained within a boundary wall (lcags ri). The main building has four different floor levels, and is built with rammed earth walls around a timber frame. It consists of two distinct parts, a 16-pillar Maitreya chapel (byams khang) and a 24-pillar assembly hall (‘du khang) with a skylight. There is also a small protector chapel (mgon khang) on the ground floor. The upper floors contain a library, more chapels, sitting rooms and a kitchen.

THF was invited to visit Beri in 2000 to look at the condition of the main building, especially at the rooms containing historic wall-paintings. A site inspection revealed that the building suffered from extensive settlement of the timber frame, wall cracks and water infiltration, caused by leaking roofs and lack of drainage. Wall-paintings belonging to different restoration periods (18th-20th century) showed extensive cracks, and in some parts they were flaking off the walls. Subsequently the local authorities, the monastic community and THF agreed on a cooperation project in order to restore the building. In partnership with the Cultural Relics Tourism Department and the Department for Religious Affairs the project began in late 2001.

Description of the work

In late 2003, the main work was completed. The upper two floor sections were particularly damaged and had to be partly re-constructed. The rammed earth walls and the ground floor timber structure and wall-paintings have been successfully retained. Due to the lack of locally available traditional building skills, THF trained 90 villagers who did the actual rehabilitation work. They were supervised by experts from the Lhasa old city project, both masters and graduates of the previous vocational training project, which now has gone into next generation.

The project received financial contributions from MISEREOR, Cultural Heritage without Borders and Trace Foundation. This was the single largest historic structure (four stories) that THF has worked on so far.