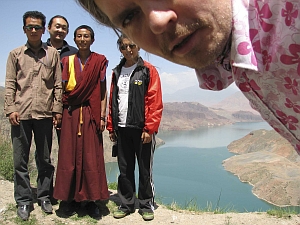 Tibet Heritage Fund (THF) was founded by André Alexander and Pimpim de Azevedo in Lhasa in 1996. It was directed by André and Pimpim until his tragic death in 2012. During this period Yutaka Hirako was China Program Manager; Sylvester Kaben was the treasurer, Lundup Dorje and Lobsang Ngudup were Kham and Qinghai program managers; Tseyang was chief accountant and Nyima Tsering was traveling ambassador.

Currently THF is directed by Pimpim de Azevedo and Yutaka Hirako, and Sylvester Kaben is the treasurer. Our current projects are located in the Indian Himalaya, especially in Ladakh. Yutaka works as program director and architect of our local branch organisation, Leh Old Town Initiative (LOTI), with Stanzin Dolkar and Sonam Gyatso helping to manage the projects, and Pimpim fundraises, plans and supervises the projects.

In Ladakh, visit us between April and October at:
Lakruk House, Stalam, Leh 194101 Ladakh UT India, just below the old Royal Palace and the Red Maitreya Temple.

In Beijing we used to live in an old courtyard house with a pomegranate tree, close to the Hohai lakes and the Drum Tower, but spent most time in Kham and Amdo.

In Hong Kong come and see us on Lantau Island.