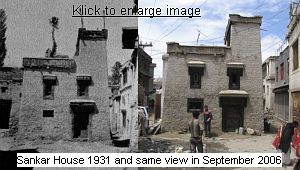 The Sankar Labrang was formerly the home of a monk from Sankar monastery who served as caretaker of the White Maitreya temple nearby. However, several decades ago, caretakership was given to the Goba family who also live nearby. Since then, the house stood abandoned.

In recent years, Sankar monastery developed the plan to demolish this house and construct a modern, concrete-frame shop building on the site.

Because of persistent lobbying from THF/L.O.T.I., the monastery agreed to let the building be used for several years as showcase of the old town conservation project. 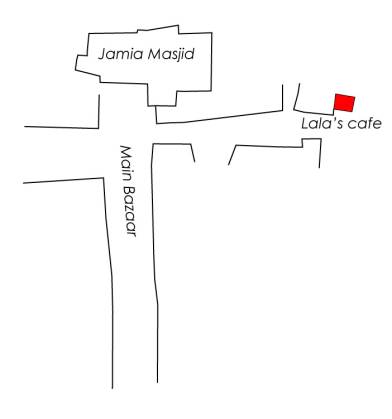 THF/L.O.T.I. have since turned the house into a “Heritage House”, with a permanent exhibition room dedicated to the history of Leh, the architecture of the old town and the on-going conservation projects. Called Lala's Gallery, or Lala's Cafe, it serves as entry point for visitors to the old town.

Work that was carried out during the conversion in 2006 included:

The building has a shrine room where five huge stone carved Buddha images stood almost forgotten. The room was also restored, and now is accessible to the public through the back entrance of the house, while the non-profit exhibition space is accessible through the main gate. Download the flyer here.

Planning and supervision: André Alexander, Andreas Catanese and Pimpim de Azevedo. Diskit Dolker negotiated with the owner, Sankar monastery.
Since 2006, we had a number of very nice parties at the Sankar house, with Ladakhi traditional music and Indian Bollywood music.