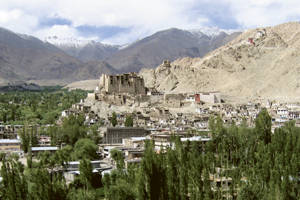 Located at an altitude of 3500 meters above sea level, Leh is a city of some 30,000 inhabitants. The population doubles in size during the summer tourist season, when people from all over India come here looking for work. To protect the Ladakhis from economic competition that they might not be prepared for, the government has made it impossible for outsiders to acquire land, and even opening businesses or working requires permits without a Ladakhi partner. Thus the Ladakhis are benefiting more from tourism than their cousins in Tibet. However, 50,000 tourists (in 2006) wanting regular showers and flush toilets and producing non-degradable garbage (water bottles, food wrappings, toilet paper etc.) are putting a severe strain on Ladakh’s fragile economy. There are worries that in another 10 years of uncontrolled sprawl and degradation of the natural environment, Leh will begin to resemble the polluted Kathmandu valley.

The history of the Ladakhi capital of Leh still remains to be written.
In the 15th century king Tragspa Bumde (Grags pa bum lde, r. ca 1400-1440) built three Maitreya temples in Leh, located respectively at the lower and upper edges of the town and high above town on a ridge. These have been important religious focal points of the city, and are the oldest surviving structures. Only a few Buddhist stone carvings arguably bear witness to the beginning of Ladakh’s recorded Buddhist history in the 10th century.
King Senge Namgyal (c.1570-1642) then transformed Leh into a proper royal capital, by building the royal palace Leh-chen Pelkhar, a nine-story stone structure erected in the early 1600s in the Tibetan style made famous by the slightly later Potala Palace in Lhasa. He is also said to have built massive rammed earth walls around the original residential area.
Leh today is still dominated by the former royal palace, which is now owned by the Government of India and restored by the Archaeological Survey of India (ASI). There are altogether eight Buddhist temples and monasteries and three mosques in Leh.
The old town consists of roughly two hundred stone, mud and timber houses sandwiched between a few remaining portions of the rammed earth city walls. Located on the slope below the palace, the old town is still partly accessible through ancient stupa gateways.
The architecture of both town houses and temples is comparable to that of Lhasa. Since Lhasa has recently undergone a very dramatic transformation, Leh is now the best-preserved ensemble of urban Tibetan architecture in the world.
Nevertheless, an incoming road has already begun to transform the lowest section of the old town. Lack of water supply, sanitation and transportation facilities in the upper sections have caused people to abandon their homes. Several buildings are severely dilapidated.