The Leh old town is one of the last well-preserved towns in the Himalaya region and a rare example of a well-preserved Tibeto-Himalayan urban settlement. The historic town consists of about two hundred buildings, including several Buddhist temples and mosques. It is located on the southern slope of rocky hill dominated by the Leh palace. Every house is an example of Himalayan vernacular architecture, and the maze of narrow alleys is the unique feature of the urban fabric of the Leh old town. More ever, the old town is the home to the local community who live in their ancestral houses through the centuries. Leh old town still preserves Ladakh’s ‘living heritage’ and the preservation of the town is an important task to prevent it from be wiped away by the wave of unplanned modernization. 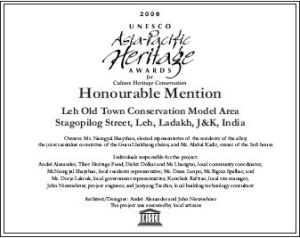 In particular, the Leh old town is now threatened by the RAY scheme, (a government slum development project to replace the traditional style houses with concrete framed buildings). This scheme was created by the Ministry of Housing and Urban Poverty Alleviation to make “Indian cities slum free by 2022” and has been already implemented in various cities of India.

THF has created a database on historic Leh, that included architectural surveys, photographic documentation and information on the building's history and usage. At present, only a small part of this work is accessible via our Online Archive Database with more to come.

The Leh Old Town Project was one of the winning entries in the 2006 UNESCO Asia-Pacific Heritage Awards.
Klick on image for PDF-view 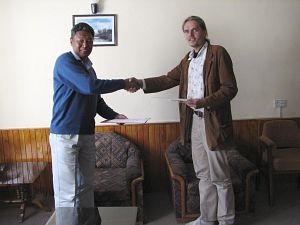 August 2006, THF signed a five-year Memorandum of Understanding with Ladakh‘s local government, the Ladakh Autonomous Hill Development Council (LAHDC). The MOU regulates how the two sides will work together for the rehabilitation of the Old Town of Leh. 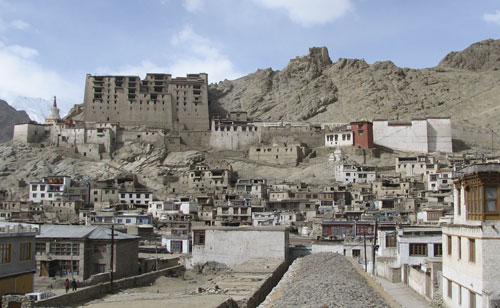 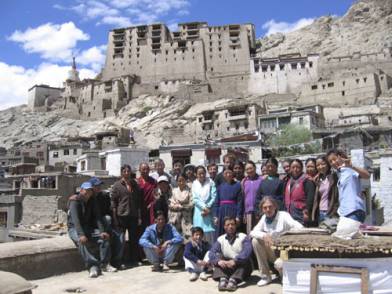 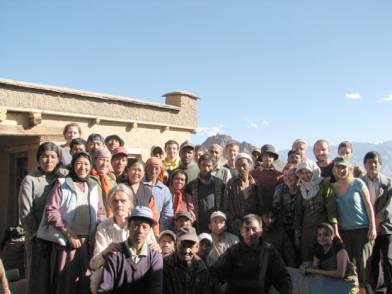 In 2004, THF conducted further extensive surveys in the old part of Leh, joined by Ladakh's first urban planner, Ms Diskit Dolker. We inventoried 178 historic or traditional buildings, and we also looked at family structures, income situation, gender balance, social structures and problems in the neighbourhood. The average monthly household income according to the survey for over 50% of all households is between 2000 and 6000 Indian Rupees, i.e. between 37 and 111 Euro. According to HUDCO, the Indian government’s Housing and Urban Development Corporation, this qualifies as Low Income Group (LIG). The lower end of the scale is below the official UN poverty line.

There are only five public water taps in the central area. As a result, residents of central Leh get less than 10% of the drinking water amount recommended by the Indian government (100 lpd) by tap.
Over 60% of all buildings in the old town are inhabited by the owners, either exclusively (37%) or with some rooms rented out (26%). 10% of all buildings are vacant, often in very dilapidated condition. Only a quarter of buildings in the old town are in good or very good condition, while over 50% of all buildings are in poor to bad condition. A lot of very dilapidated houses are still inhabited.
The old town has water supply problems. In the old days, people had to climb downhill to fetch their water. Now at least there are five public taps. Drainage is a problem, there are only a handful of open channels that are frequently blocked (or frozen). Heavy rainfalls or a neighbor’s washing day can trigger the flooding of one’s basement. Over the past 15 years, most well-off families have moved away, especially those that owned land in the greener, well-watered parts of the valley. This was made possible because these families no longer depended on agriculture for their livelihood, having found better sources of income in the operation of guest-houses, souvenir shops, restaurants or internet cafés. In stark contrast to booming modern Leh, the old town is in a visible decline. The former centre of the country has, in effect, become a slum. 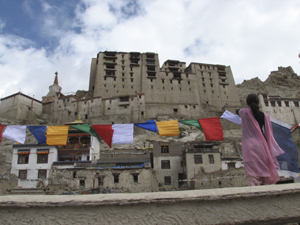 THF identified 6 areas of major problems
1 Poor quality of living conditions
2 Decline of old town, government inactivity
3 People without land are trapped in poverty
Loss of cultural identity due to migration and rapid economic changes
5 Loss of traditional skills that are no longer useful in modern economy
6 Tensions between different communities
A draft database containing the documented buildings and a map of Leh can be found in our Online Archive Database.

In recent years more and more Ladakhis regardless of confession have begun to publicly lament the decline of their former capital. Hoping to put our Tibet experience to good use, THF offered to try and revive and rehabilitate the old town in partnership with interested communities.
Because of our survey, we had data on every building and household, and felt like almost knowing everybody. The question was, did the people still trust each other well enough to work together to turn the city around?
As we soon found out, among the many changes in society lamented by many Ladakhis is the erosion of the community spirit, long a dominating feature in Ladakhi culture. Every settlement had communal land and communal tools (including all the gear necessary to celebrate a marriage in the due pomp and circumstances). And for construction projects, whether someone’s home, or a Buddhist monument or a public road, everybody would join for as little compensation as some home-made beer and handfuls of dried apricots. In Leh, most of the old houses are built attached to each other, sharing walls or even vertically joint, with public access ways running underneath houses and people sharing sheds for animals. Public squares between the densely-placed houses were used for celebrations and processions.
These days, people fight bitter disputes over empty plots of land that lie between properties, and feud with their neighbours about physically separating adjacent houses. Improvement works on buildings and alleyways are routinely objected to by jealous neighbours. This social development has certainly contributed to the decay of the old town.
Tensions between communities have aggravated, over the last 15 years Muslims seeking relieve from the Kashmir conflict have enlarged Ladakh’s Muslim minority. There have been occasionally violent conflicts between the communities along sectarian lines (though not nearly as dramatic as, for example, the Gujarat riots where hundreds died). 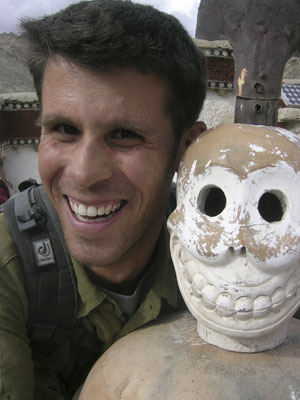 THF’s intervention strategy
The social data we obtained during our survey strongly suggested intervention to improve people’s livelihood and living conditions. This was matched by a generally expressed desire by many community members to reverse the decline of the old town. Technically, some aspects of improving conditions in the old town do present a challenge, especially building a drainage system into the sheer rock for a town hat has nearly six months of sub-zero temperature winters. Mostly, however, the technical problems are fairly easy to solve. The houses are built in Tibetan fashion with sun-dried mud bricks around a timber frame on stone foundations. Local clays and soils are traditionally used ingeniously to create waterproof roof layers and dust-free plastered interior surfaces. The task would be to successfully identify and use the best of the traditional skills, which have slid into semi-obscurity since the advent of subsidized cement and steel.

To rehabilitate the old town, we adopted the following strategy for an integrated approach, developed by the THF founders for the Lhasa Old City Conservation Program (Lhasa 1996-2000) (where we worked under a very different political set-up).

The LEH OLD TOWN CONSERVATION PROJECT was set up in cooperation with the local government, the Ladakh Autonomous Hill Development Council, and with local community groups.
THF currently works on a planning framework for Leh.
In the meantime, we have set up an action plan consisting of the following components: 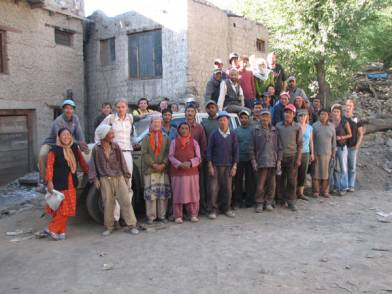 1. Improve infrastructure and services to reverse the decline with popular support. For this we began lobbying of various government bodies for investment into adequate infrastructure improvement. We expect this to take some time, as Ladakh's fledgling autonomy government still depends on the will of Jammu & Kashmir State for their budget. So far we obtained some local funding for infrastructure activities, as well as guarantees for government–implemented building of soak pits and drainage channels. For some time, investment for the old town will have to be raised elsewhere.

2. Provide local ownership of project though co-financing for housing upgrading, balancing conservation with satisfaction of local needs (upgrading instead of restoring). For this we designed a model to offer 50% co-financing for adequate rehabilitation of homes, on the condition that indigenous labour and indigenous skills are used on preferable basis. Based on comparable work in Lhasa, we also offer free planning advice, to bring improvements such as bath rooms with drains, bringing more light into the often dark houses (built when glass was not known or available), improving the composting pits of the traditional latrines and increasing the efficiency of traditional clay mixes for interior finished and water-proofing of roofs.
3. Restore important public monuments such as Buddhist temples, Muslim places of worship and historic fortifications.
4. Starting a training (and employment) program. At present we are training fa team of local women and men in traditional construction skills, two local persons (one male, one female) as restorers, and another two as surveyors and draftspersons. This is aimed to give employment to those inhabitants of the old town who do not own land and have little education, and therefore giving them an economic perspective.
5. Creating a model rehabilitation area. Based on the perceived need for intervention, willingness of the community and architectural importance, we would choose an area to concentrate different activities – home rehabilitation, infrastructure improvement, monument preservation. Completed works could then be used to demonstrate the feasibility of rehabilitating the area based on community participation and traditional skills. The completed works could be used by communities and local NGOs to negotiate similar works from donors and government agencies. More directly, other communities could learn from the example and start to implement activities on their own.
6. Identify or establish local structures and people that can continue the project in the long term.
In 2005, the Leh Old Town Initiative (L.O.T.I.) was registered as local NGO under the India Society Act. This will be THF's most important partner institution, to whom the project can be handed over in the future.

Since we start the Leh Old Town Initiative in 2005 many people join THF/LOTI team.

Since 2012 Yutaka Hirako is working as program director and architect for THF/LOTI, assisted by Pimpim de Azevedo.