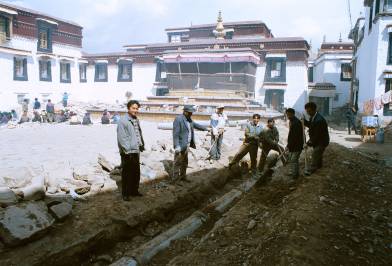 THF strives to preserve living historic cities. Living cities are subject to change, and they must confrom to the aspirations of their residents. That means for example people living in old neighbourhoods want better water supply and more hygienic forms of drainage. By improving the water and sanitation situation in the old town Lhasa for example, THF could demonstrate the feasibility of rehabilitating the old town and turning it once again into Lhasa's most attractive quarter.
Since then, most THF projects have a water and sanitation component.
Picture on the right: THF's water and sanitation team, managed by engineer John Niewoehner and Lundup Dorje, connect that most venerable of institutions, the Lhasa Jokhang temple, to the Chinese sewage system. 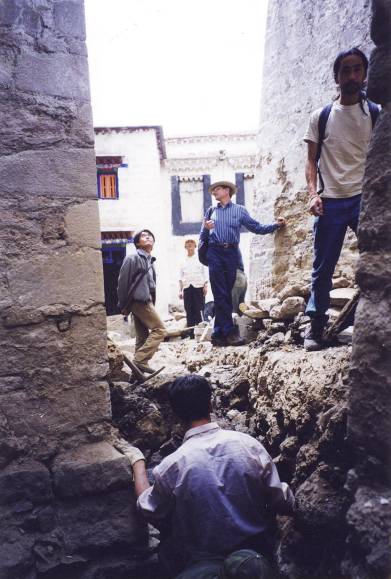 John Niewohner (center), Tomoaki-san (left, who created the Tibetan version of THF's website) and Ken Okuma inspect THF's work in the Lutsang courtyard of the Jokhang. We excavated several truckloads of soil that had accumulated in order to restore this courtyard to its original level. This was necessary to stop water infiltration into the wall of the Jokhang, and to make the courtyard useable again. THF also paved the courtyard and installed drainage pipes (summer 2000). 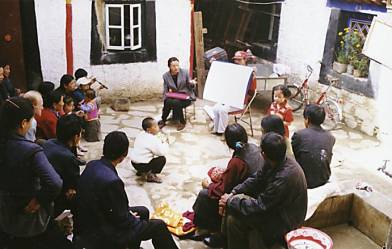 THF team provides basic hygiene education to the residents of a rehabilitated residential building in Lhasa. 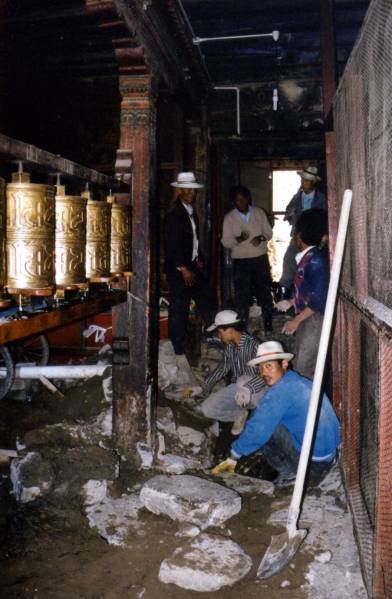 THF workers that were trained in doing water and sanitation installations were invited by the Jokhang to improve drainage of the Nangkor courtyard (summer 2000).

Ladakh: Footpath upgrading - Stalam Street, Leh
Stalam Street is the main access to Leh palace, and a principal artery in the old town. The local community considers improvements to the street to be a tremendously positive change. In 2012, a major part of the Stalam Street was upgraded, with a length of 282 meters being entirely paved with slate and metal covers installed on the drainage channel. In the future every small alley could be improved with a similar scheme, connecting every house in the vicinity with clean drinking water and an efficient drainage system.

Supported by ACHR/ACCA and Jammu & Kashmir Ministry of Tourism.

Improving the infrastructure in Leh Old Town
In 2013, THF/LOTI continue with the improvement of the Leh Old Town infrastructure in the areas of Gogsum, Stagophilok and Upper Stalam. We received many requested from the residents and the community to upgrade the drainage system and street paving in the old town. We implemented these upgrades in three sections of streets and alleys on request of the local community.


West Stupa gate alleyway, Leh
West Stupa gate is one of the four entrance gates to the old town, which was once walled for defensive purpose. The footpath project covers the section between the West Stupa gate and the junction of the Manikhang and Gogsum districts in the Old Town. This section of footpath is about 50 meters in length, there was small gutter running beside the path, but most of the time it was blocked and not functioning. THF/LOTI constructed a new drainage gutter and its size was enlarged from 10 inches into 12 inches widths to ensure good water flow. Also we built a water tap for public use, and the water pipe was laid under the slate stone paving.
The street was drastically improved as well as its appearance with the slate stone paving. Residents and visitors benefited from this improvement.

Upper Stalam side-path paving, Leh
A major part of Stalam Street was previously upgraded by THF/LOTI, the main sewer line was laid and the street was paved with slate stones. This project was much praised by the local residents and we received many request from different neighbourhoods to continue.
This section of the footpath is about 15 meters length and shared by 6 families.
We designed the cover for the drainage gutter, a detachable metal grille cover fixed into rectangular frames, which can be conveniently opened when it needs to be cleaned. The drainage channel was made through the street and connected to the main sewer in the Stalam street. The street floor was paved with slate stone, on top of a concrete bed.

Stagophilok side-path paving, Leh
Stagophilok is the name of a district located on the south-east side of the old town. The footpath project was implemented on a branch alley of about 20 meters length in the area. This alley is shared by 5 families. In this section, we made a smaller sized 10 inches widths gutter since there was no extension of the drain channel due to the street being a dead-end. The drain was connected to the existing main gutter and one catch basin was made for cleaning purpose. The alley was paved with slate stone as well.

New toilet with innovative cleaning system, CAML
In addition to traditional dry compost toilets the Central Asian Museum Leh (CAML) wanted to provide water flushing toilets for visitors. in 2014, THF collaborated with German water engineer Mr Ludwig Gloger and designed a new public toilet for the museum complex and the extension building. The system was innovated to separate the liquid and the solid human waste through a sieve box. The liquid will be treated through the filter system before discharging into the stream, and the solid waste will be pulled out in to a compost pile and mixed with soil for a later use as organic fertilizer. A model of this system was created and tested, and then we designed the two story building with five toilets. Three flush toilets will be connected to the sieve box and filter system and two compost toilets are made particularly for use in the winter season.
The site was chosen at the North corner of the museum complex, an area piled with garbage. This place is located along the stream and the ground water level was very high. We began by clearing the piled garbage and excavating the ground down to the foundations. Masons laid the French drain pipes to release the ground water and built the stone foundations with dry masonry. This was chosen for on account of the dampish ground conditions on the site.
The filter tank was built and connected to the pipework. The filter tank has 6 partitions filled with different sizes of gravels and sand, which clean the waste liquid from the toilet. In 2015, the toilet building will be constructed.

Water and sanitation in Leh Old Town
Leh has no proper sewage system and dirty water is thrown in the open drain or is disposed into individual soakage pits, which contaminate the ground water. But in the case of the Leh old town, even to make the soakage pit is quite a challenge due to limited space of the alleys and the hard solid rock ground.

Currently in Leh old town people need to collect the wastewater in buckets and carry it to the nearby disposal points on the street. Furthermore, the water from rain and snow accumulates on the streets and gradually infiltrates in the buildings’ foundations and walls, causing critical damages to the buildings’ structure.

In 2017, THF/LOTI, after discussing with the residents, created a section of public gutter and water supply line. By considering the ground condition, we designed a concrete gutter, for which was necessary to dig down only about 30cm from the street level. The gutter it is covered with a metal grid, which can be easily removed for cleaning and maintenance purposes. Water supply pipes were also laid adjacent to the gutter. The pipes were covered with insulation sponge and laid in sawdust, to provide better insulation. We paved the street surface with slate stone and made adequate slope toward the gutter. Now, rainwater and snow can drain well. We made 72 meters length of public gutter and water supply line. Seven households got the connections to their house. We organized a meeting among those households and discussed about the responsibilities of cleaning and maintenance of this public gutter. In the near future, the households are going to apply for the permit to connect to the government water supply.

The water and sanitation project supported 7 families and benefited 24 people.

An Extension Study on the Water and Sanitation in Leh Old Town
In 2018, THF/LOTI together with Ms Shiriin Barakzai from UK, made an extension study on the current situation of water & sanitation. The field-based study was compiled in a report “Water Supply, Surface Water and Sewerage in Leh Old Town - 2018”.
A comprehensive study on the current status of Water & Sanitation in the old town area was designed to develop a strategic plan for further improvement.
Studies were undertaken on the following categories; surface water, water supply network, sewerage, toilet and solid waste. Furthermore, we created CAD files mapping the current status and conditions, and other additional supporting materials, which were compiled for the report. All of the study sections were concluded with recommendations, which are useful for further planning and project implementation.

AAA House - sanitation project
To improve sanitation, we tried urine-diverting system of separating liquid and solid in one of the dry toilets. We also installed water pipes in the kitchen and in both traditional dry toilets, for hand washing and showers. The bathroom walls were tiled and an electric water heater for shower facility was installed.
We built water tank storage on the rooftop, made of glassed panel and sawdust mud brick. The mud bricks were made from wooden shavings and mud for lightweight structures, to insulate the water tanks on the roof and to integrate them into the old town landscape. This was designed for use in the winter season when it reaches sub-zero temperatures.