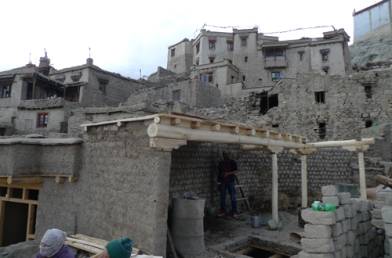 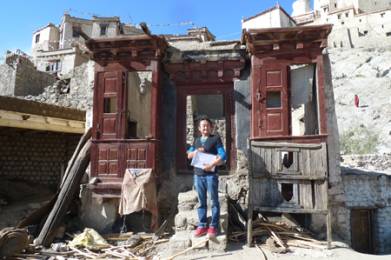 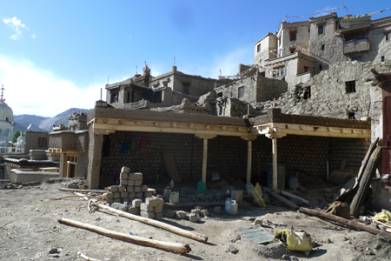 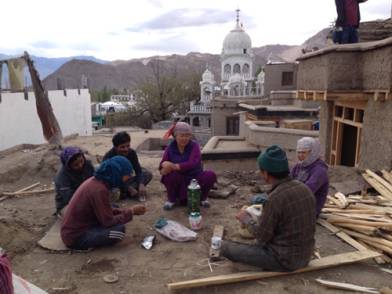 Shangara house is one of the big mansions in the old town. The Shangara family used to lead the regular trading mission to Lhasa, called “Lapchak” mission, which was a tribute to Tibet government as the result of the Tibet-Ladakh-Mughal war that ended in 1684. The Shangara family was one of the important Buddhist families in charge of the trading missions, along with the other Muslim family traders. This mission continued until 1940s.

Mr. Jigment Whangchuk from Shangara family was interested in restoring his ancestor’s house and approached THF/LOTI. After our discussion, Mr. Jigmet agreed to invest in the project while we would restore the house. Since there are tenants living in the house, we decided to restore the west part of the house sharing the wall with the neighbour Kalmak house.

Before starting the restoration, the owner invited a monk to perform a prayer, in order to receive permission from the land spirit Lu and to seek its support for safety during the construction work.

The western part of the house consists of four rooms, storage and a dry compost toilet. The building was in a severe conservation condition, there were several temporary supports to hold the building in shape. We dismantled the damaged wall and consolidated the stone foundation, followed by building the wall along Kalmak house. We replaced most of the beams, renewed the ceilings and opened two skylights for natural lighting to the lower rooms. On the roof, we re-built the Yaps roofed gallery, which once existed.

With the first phase of the restoration project now completed, we are planning to restore the whole building in coming years.