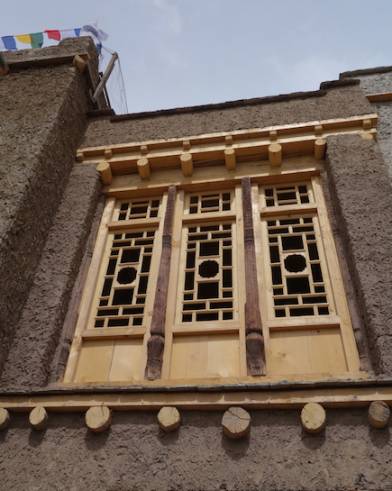 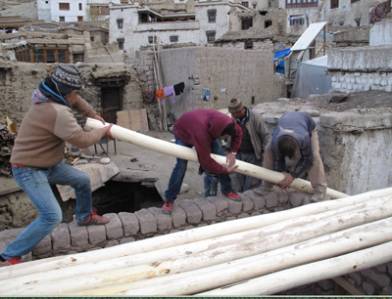 Akbar house - South wing
Akbar house is a small house consisting of two parts: the South and North wings, which are connected with an overhang structure above the public street. The south wing of house was totally collapsed and no longer inhabitable, and only the north wing was occupied - rented to a tenant.

The Goba family, approached us in 2013 to repair the Southern wing part of the house and make improvements. The craftsman team began the work by clearing the ruined site, during the clearance work many timber elements were collected for future re-use. Once the original stone foundation was excavated, we checked its condition and consolidated where necessary.

Subsequently, the main rebuilding process took place; adobe walls were laid on the stone foundation and structural timbers such as pillars and beams were assembled and the ceilings covered with rafters and Taloo willow twigs. The house was re-arranged into two rooms and one kitchen room; those were made accessible via the staircase.

The Goba family is very happy with the repair and requested that THF/LOTI help to repair of the rooms in the North wing during 2014.

Project co-financed by BMZ and the house owner. 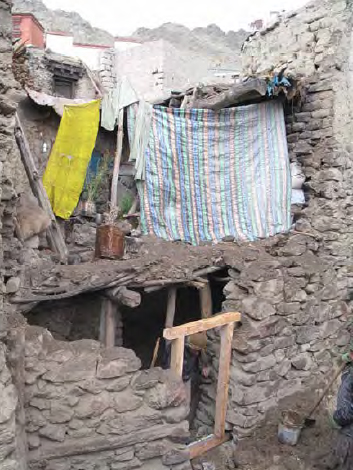 Akbar house - North wing
In 2014, we collaborated with the owner family to restore the North wing of the house which consists of three-storeys with an open courtyard and balcony.

The owner provided most of the wood for the roofing and THF/LOTI implemented the restoration work. The tenant was temporarily moved out during the work.

We started the work by dismantling the top floors, and set up a temporary supporting structure to allow repairs to the damaged parts of the ground floor.

The masons bound the loose stones with traditional mud mortar and placed them in a straightened position. Also we built a supporting wall for reinforcement. On the first floor, the kitchen room was repaired: originally there was no window in the room, so we made a new window on the courtyard side and a sky-light in the ceiling, those windows will improve the light and ventilation of the dark room.
The masons replaced the original pillar/brackets and beams and laid new rafters and taloo (willow twigs) to cover the roof. The shrine room above the kitchen was also repaired. A new window was fixed in the south wall and the original door retained, many of the old rafters were recycled in the roof. Two sides of the wall shared with neighbouring houses and the stone stairs were also repaired. 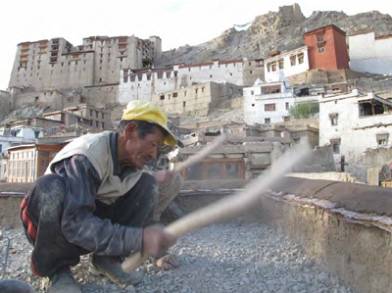 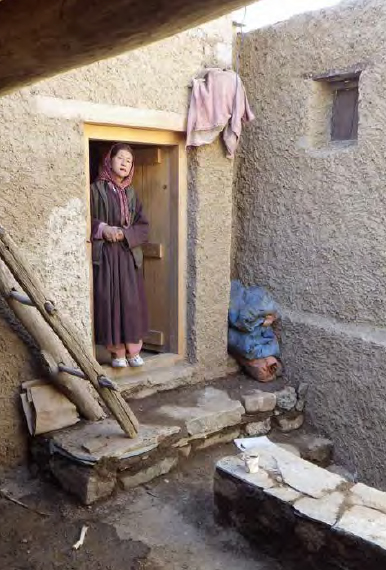 After the structural work, the team continued to work on floor paving and making the parapet. The entrance hall and the courtyard were paved with Yamangs (slate stone), the kitchen and shrine room floors were made with clay. The parapet was built along the terrace and the rooftop of the shrine and its edge were treated with thin slate stones and donkey dung mixed with soil to improve waterproof performance. The restoration work was finalized with the plastering and whitewashing of the walls and application of linsee
d oil on the timber elements.

The restoration of the Akbar house North wing was completed and the tenant moved back to the North wing. They are happy with the repairs and improvements in the house.

Project co-financed by Prince Claus Fund and the house owner.