The old part of Lakruk house is located at the upper end of Stalam Street, attached to the main Lakruk house. The heavy rain that fell in September 2014 led to the collapse of part of the house but fortunately no one was injured.
The house owner approached THF/LOTI and asked help with emergency repairs. The old part of the Lakruk house is a small three-storey building, structurally independent from the main Lakruk house.
THF/LOTI assessed the damage and the underlying condition of the building, meanwhile the tenant tidied up his personal belongings. We build a support for the walls and ceiling and started to remove the debris. Any building parts and materials, which were recyclable were selected and stored in order. 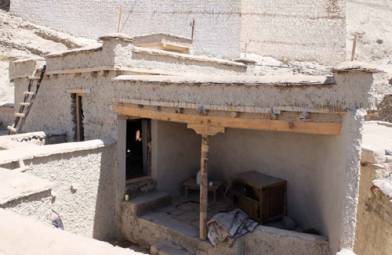 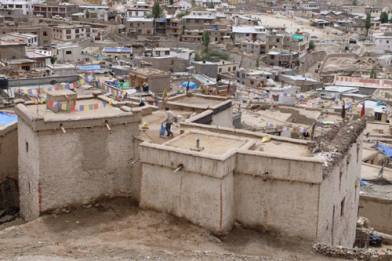 The restoration work begun with the roof repair of the summer kitchen where many of the rafters were rotten and weak. To prevent further damage, we decided to repair the entire roof of the second floor.
After opening of the roof, the masons repaired the cracks of the adobe wall. The broken pieces of adobe were carefully removed, and the wall was repaired with new bricks and mud mortar to make the proper joints. During the wall repair the door frame was also repaired and fixed back, and one rectangular window was fixed to improve the natural light. One skylight was opened in the ceiling. After the wall repair, the masons laid the new rafters for the ceiling. Then we repaired the Yaps (roofed terrace) that had collapsed. Once the structure was repaired, various layers of roofing soil was laid for water resistance. The parapet was built along the roof edge to finalize the roof.
The restoration work continued in the courtyard. Some rafters below the courtyard were weak and replaced with new pieces. At the same time, the masons repaired the wall bearing the weight of the courtyard floor. We also paved with slate stone the walkway from the entrance hall to the open courtyard, to improve the passage accessibility and waterproofing performance. Due to the cold weather conditions, we could not work on the interior in this year. However, we were able to secure the building structure from further damage.

In 2015, in Lakruk main house, we applied new plaster to the walls and put slate stone flooring from the staircase to the Yaps on the roofed terrace. Also, we repaired the roof and made an adequate slope and gutter to release the rainwater effectively. The top of the parapet was covered with slates to prevent damage from water infiltration and weathering. These small repairs improved Lakruk house’s roof and parapet and strengthened them against water infiltration.

In 2017, we seal the old chimney, make a skylight, repair the broken windows and improve the condition of the ‘glass’ room. After the repairs, the tenants were very happy with the improvements, specially Rewa Tsering, the lovely cat who takes sunbath in the glass room.