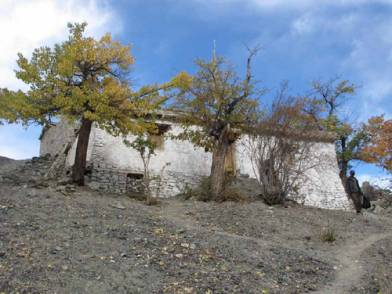 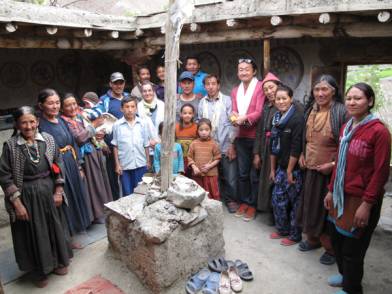 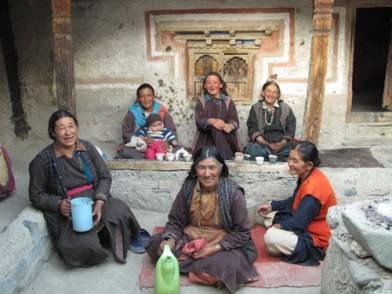 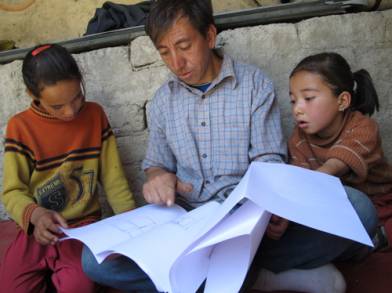 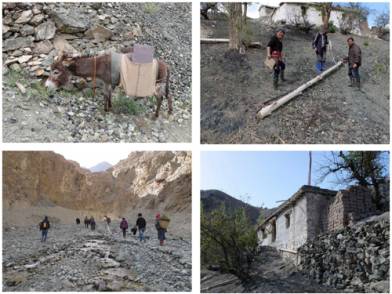 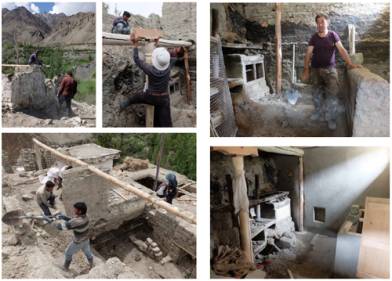 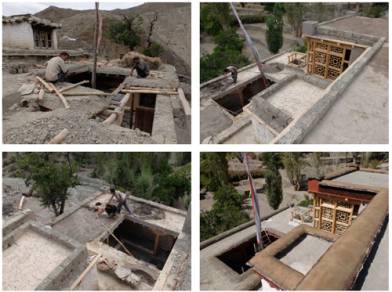 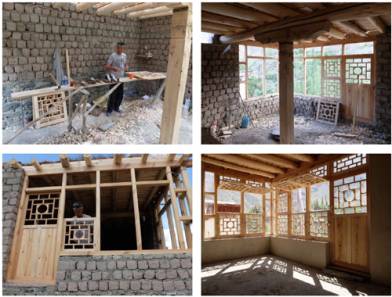 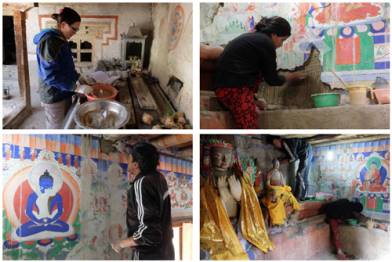 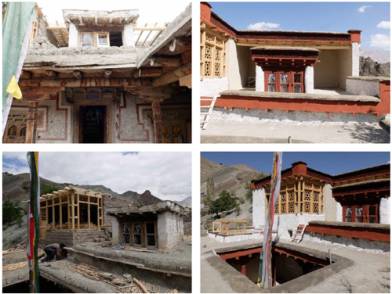 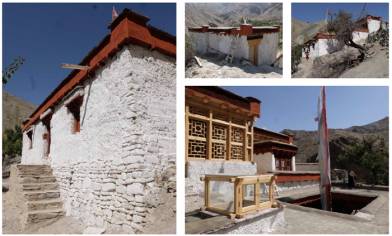 Takmachik is located in Kaltsi district, in lower Ladakh, approximately 90 km from Leh. In 2012, the Takmachik community invited THF/LOTI team to look at Hemar, a small village temple. During that time we made the architectural survey of the temple and the survey of its condition. Hemar temple was built as a hermitage for the practice of meditation and is located on top of the mountain. To reach the temple it is necessary to walk about 3km up the hill from the village of Takmachik. This place has once been used as the summer pasture for Takmachik villagers but is no longer inhabited. However, there are still several vacant houses and fields with trees and Hemar temple is still used by the community for various religious ceremonies.

The temple’s condition is poor, with thick layers of roofing soil, which most probably were added year after year to prevent water leakage, but caused serious structural deformation and wall damage. Part of the ceiling structure collapsed from the heavy weight of the roofing soil. Also, there were signs of water leaks, which had damaged the wall paintings.

In 2016 we started the restoration work with the preparation of the building
materials. The villagers carried the necessary building materials to the site and cut the trees to prepare the wood for the restoration. Later, our local conservation team carried out the consolidation of the wall paintings in the prayer room and in the courtyard gallery. The paintings had suffered damage from wall cracks, water leaks, fragile coats of paint and paint flaking. At this stage the conservators worked on filling the major cracks, fixing the flakes and treating the paint coating. All the work was aimed at consolidating the fragile wall paintings before the structural repair work could take place in 2017.

In 2017, we continued with the restoration and we started with the structural restoration. We dismantled the Yaps (roofed gallery) and open the east side of the building roof, were the old kitchen and storage space are located. We replaced the damaged ceiling structure and consolidated the weak wall, installed new windows, a sky-light and a chimney. We improved the kitchen condition by installing running water using the natural mountain water. We built a new glass room above the old kitchen space with newly designed latticed windows and an elaborate pillar-bracket that became the charm of this single room. This room is accessed from outside as well as from the roof top. We continued to work at the courtyard space level. We changed some broken beams and pillar-brackets and we paved the courtyard with slate stone.

Later, we reconstructed the Yaps (roofed gallery) on the rooftop.
Villagers also contributed with labour, collecting the Askot bush from the mountain, bundled and coloured the bundles with oxidized red color to prepare the main material for the parapet decoration frieze. This red frieze is used to decorate the parapet of monastic buildings.

We upgraded the whole parapet by installing slate stone and applying oil coating, which improved the waterproof performance. We also renew the whole roofing soils and improved the roof’s slope toward to the rainwater gutters.

After the structural work, our conservator team worked on wall paintings in the courtyard gallery and in the prayer hall. They filled in the cracks with mortar made of local soils and placed back some of the fragments in their original position. The murals were mechanically dry cleaned only for dust and dirt removal.
Takmachik Hemar temple restoration work was completed and handed over to the community for their religious and community activities.