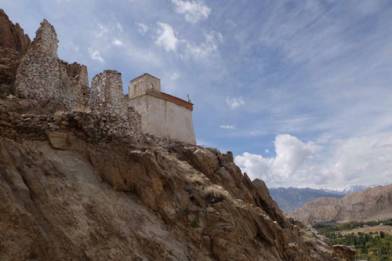 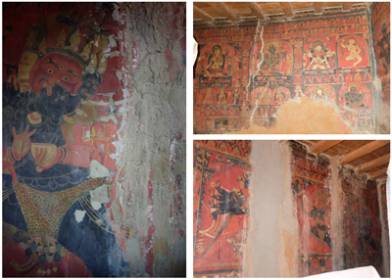 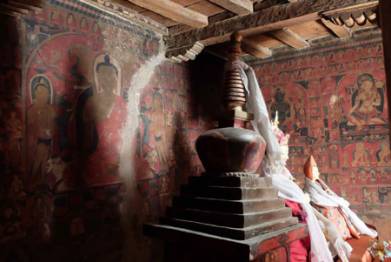 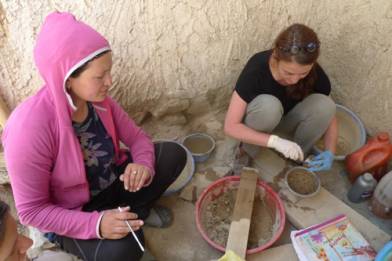 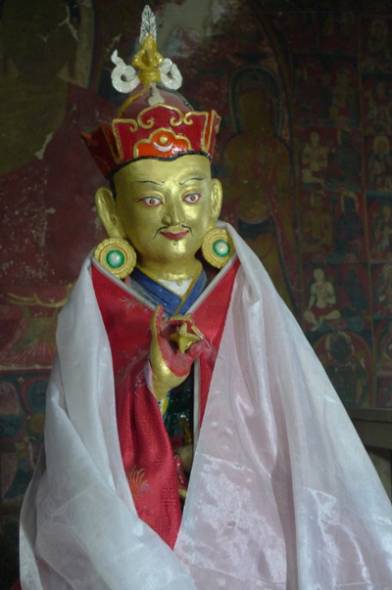 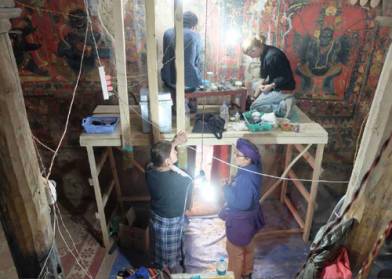 Guru Lhakhang is located in Phyang village about 20km from Leh. This temple has significant historic value with its 14th century original wall painting and building structure. It was built on a hill just below an ancient fortress. The Gasha family has been looking after this temple for many generations, and has requested the help of THF/LOTI to restore the temple.
The temple has a square plan with a single entrance door open on the south side. The building structure is made of two rows of beams supported by pillars, brackets, and rafters laid between the walls and beams. There is fine carving on the pillars and brackets, and the ceiling is covered with wooden boards. The interior walls are covered with significant painting from the 14th century on an area of approximately 40 square meters.
The murals depict typical iconographical cycles, Buddhas and Mandalas of deities, and some historical figures, lamas and patrons of the temple. According to a scholar, Guru Lhakhang is the only remaining evidence of Sakyapa influence in Ladakh in the 13th-14th Centuries.
In 2016 we started the conservation project of Guru Lhakhang. We made the architectural survey of the building and documented the wall painting condition. Visible damage to the wall paintings were damages caused by previous water leakage, loss of paint coating due to water infiltration from the ground, flaking paint, cracks, etc.
Further observation showed that, some damage to the wall paintings were caused by a previous renovation in 1998, especially by the use of chemical materials. This posed an extra challenge for the conservation of the wall paintings. Our head conservator Anca Nicolaescu led the team and started to work on the wall paintings. After studying the site and defining the work method, the conservators worked on different tasks: preparing clay mortar, filling the cracks, injecting the grout and treating the coats and undercoat of paint. They worked on different parts of the wall in parallel and dealt with various damages. The consolidation of the wall painting made good progress in 2016. In 2017, the stabilization of the wall painting was finished and the painted surface was mechanically cleaned. A special designed mortar and grout made of local materials was applied in the cracks and support losses or injected in the support detachments. The paint layer flakes were addressed, and fine edge pointing were done to consolidate the preparation layers. The whole painted surface was superficially cleaned removing the dust and dirt and a mechanical cleaning was done in painted areas with more adherent dirt deposits, which were obscuring its perception.

In 2018, THF/LOTI continued with the restoration of the 14th century temple, Guru Lhakhang in Phyang village, located about 20km from Leh. Following the wall painting conservation work completed in 2017, in 2018, we’ve made improvements to the structure. Interventions on the roof comprised upgrading the parapet by covering it with slate stone and increasing the roof slope by applying markalak clay and a thin layer of roofing soil, to improve the water-resistant performance. We also designed and built a new skylight to moderate the interior light level. We collaborated with Mr. Tsewang Norboo the current head of the Gasha family who is a skilled carpenter, in making a new wooden floor for the temple.

In 2019, THF continued with the project. We paved the floor inside the shrine with wood, improved the sky-light, repaired the parapet on the roof, stabilised the wall of the circumambulation path and paved the path with slate stones.

In 2019, THF continued with the project. We paved the floor inside the shrine with wood, improved the sky-light, repaired the parapet on the roof, stabilised the wall of the circumambulation path and paved the path with slate stones.
Project supported by Trace Foundation, COMGEST France, Shempen Sem Switzerland, Ralv and Beatrice Fust and Gasha family.