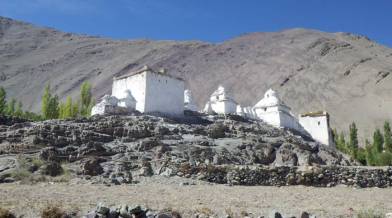 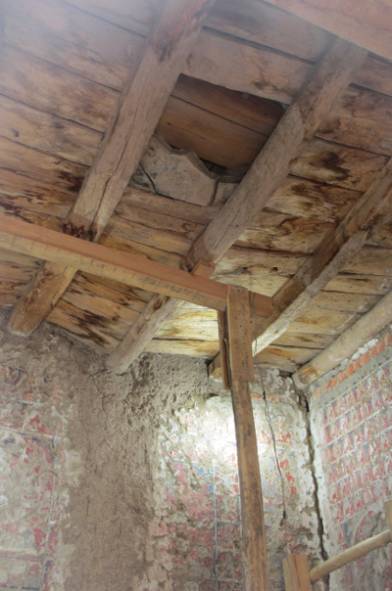 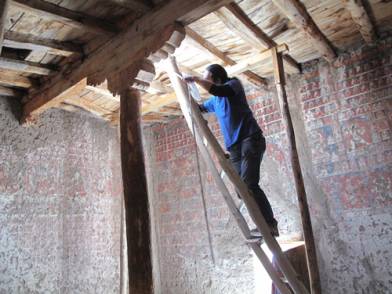 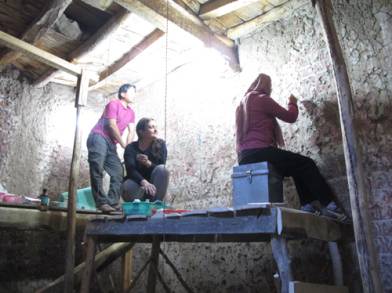 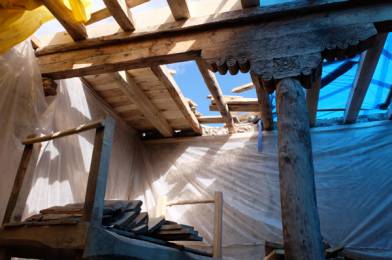 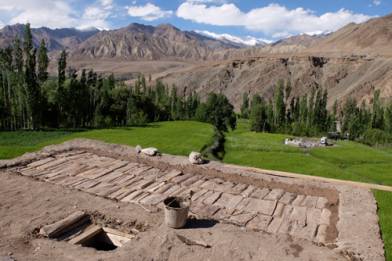 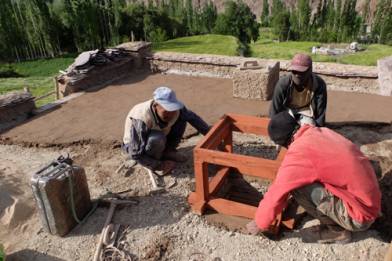 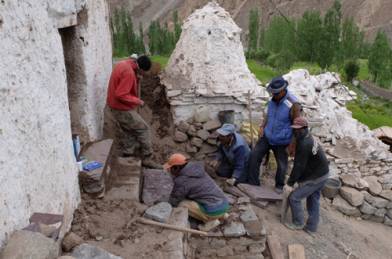 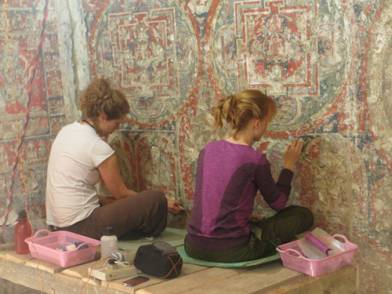 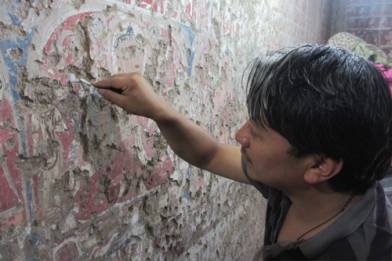 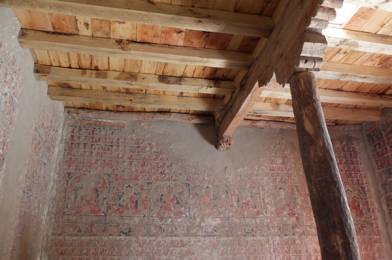 In 2014 THF/LOTI set up the conservation project of the Lotsawa Lhakhang in Alchi village, located 70km from Leh. THF/LOTI already worked on two conservation projects in Alchi: the Tsatsapuri Temple (13th–15th century) between 2007–2010 and 2013, Kumbum Stupa (14th century) in 2011. Because our work is well known in Alchi, we received a request from the local community to conserve the Lotsawa Lhakhang.

In 2013, we conducted an architectural survey, and observed that the building was in very poor condition. Most worryingly the ceiling was in danger of collapsing and barely supported with several broken rafters. Before starting the repairs to the roof structure it was necessary to consolidate the wall paintings.

In 2014 when we started the conservation project, THF set up a team of conservators to work on the consolidation of wall paintings. The wall paintings covering an area of 60 square meters, were very badly damaged due to the lack of maintenance and man made damage. Furthermore, the murals have been notably damaged over recent decades by local children playing inside throwing stones at the paintings.

The conservation work started with the mapping of the damages and tests of the local earthen materials for mortars and grouts. An emergency phase was necessary in order to stabilise the upper part of the murals (about 1m below the ceiling) where structural repair will take place. The support detachments were consolidated through grout injections, the deep cracks in the walls and wall paintings were filled in with earthen base mortar and the powdering or flaking paint layer were fixed.

The very top of the wall paintings was protected with a layer of Japanese paper and a plastic foil was attached to it as a protective layer during the roof repairs.

In 2015, THF/LOTI implemented the structural repairs and finalized the wall painting conservation project. After protecting the wall paintings, the artisans began to remove the soil from the roof. Meanwhile, the damaged corner walls and cracks were consolidated with wooden braces. The bottom section of the pillar was rotten due to damp rising from the ground. We cut the damaged part and jointed a new wooden piece, also we inserted a pillar base stone for prevention of future damage. The carpenter adjusted the structural balance and reassembled the roof structure and all the broken rafters and the rotten ceiling boards were replaced.

Also the wooden door board was renewed. The masons applied different layers of roofing soil and created an adequate slope for good water drainage. Special attention was given to the parapet to prevent any water leakage and protect the wall paintings below.

The masons repaired the stone steps at the entrance gate and paved the interior floor and the circumambulation path around the temple. We whitewashed the exterior walls and painted the parapet frieze in red, according to tradition. After the completion of the structural works, the conservator team began to work on the wall paintings.

During the second phase of wall painting conservation, the conservator team extended the treatments to the whole mural ensemble. Due to lack of maintenance in the past almost the whole painting surface was pitted. In this condition, we needed to fill the pitted holes and consolidate the original painting layer. Conservators worked in different parts of the wall in parallel, and systematically applied fillings in every hole by using edge point application of the clay mortar to the base and middle layer. Also the flaking and powdering paint layers were treated.

After stabilizing the weak paint layer, the mechanical cleaning was made to remove the dust and old splashed whitewash. The final aesthetic treatment was made with a thin mortar application in the holes. The wall painting became more visible and well stabilized.

After the completion of the project, the local community invited monks to perform a religious ceremony and the Lotsawa Lhakhang was officially consecrated.