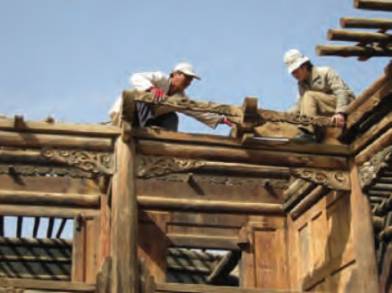 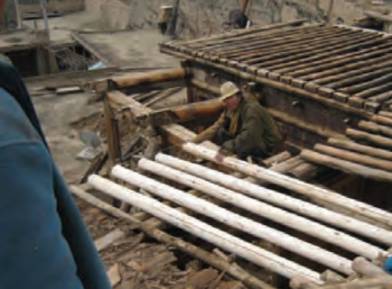 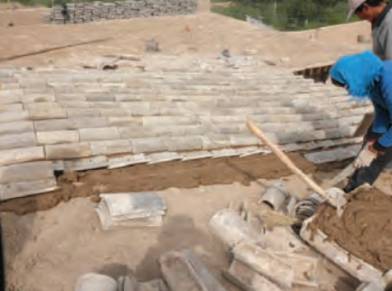 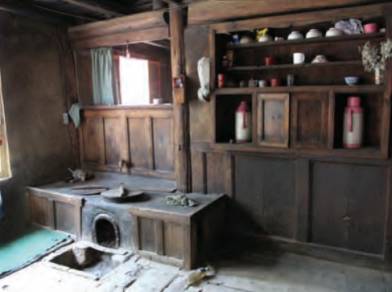 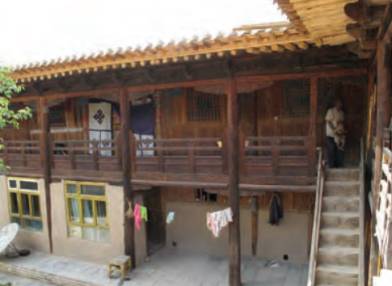 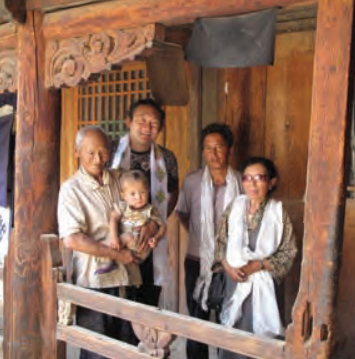 Jigme Wangpo (1728-1791) was born into the family of a local ruler. In 1743, he was officially recognized as the Second Jamyang Sheypa (the reincarnation of the founder of Amdo Labrang monastery) and took up residence in Labrang monastery. His birthplace and local residence has been preserved by his descendants, located at Nangra’s “Jambanang” village about 1.3km west from the Serkhang monastery (restored by THF in 2006-2009). The building is a two-storey timber framed structure with wooden panel partitions, typical for the vernacular architecture of the Amdo region. Special elements of the building are the long support pillars that go through two floors, and the gallery with wooden railing and elaborate carvings. This is a masterpiece of 18th century Amdo residential buildings. Previously, THF already conducted survey and analysis to prepare for the restoration. We bought timber based on our restoration estimation and stored it over the winter for seasoning. In 2010, work started with the removal of the roof. Roof tiles, ceiling boards, rafters and decorative carvings were arranged in order and re-usable items selected and then cleaned. Meanwhile the carpenters worked on the structural repairs, starting to deal with damaged pillars. We temporarily jacked up the structure; the rotten parts were cut off and joined with new wood pieces, and a new stone was added as base for each pillar to prevent future water infiltration. The pillars were brought back into their original position by the experienced carpenters. Structural work also took place in the interior. The team extended the wooden floor and a “khang” bed platform to improve the living condition. Historic wooden panels, floor boards, panel windows and ornamental carvings were cleaned and repaired where necessary. A group of Tibetan masons worked on the interior brick partition walls and plastering. One part of the west side wall was rebuilt with rammed earth, and the room of cowshed was reinforced with stones to prevent further damage from humidity. After the carpenters placed back the roof structure, the masons sealed the roof. Roof tiles were placed starting from the eaves piece by piece with traditional lime mortar. A drain system was built with PVC pipes. The courtyard pathway was paved with flat stones, and the open space with blue square bricks. In June 2010, the rehabilitation work of Jigme Wangpo house was completed. This unique timber building is a rare example of traditional Amdo architecture, which villagers and artisans have come to see as their common treasure.

Supported by MISEREOR and the Royal Netherlands Embassy in Beijing.