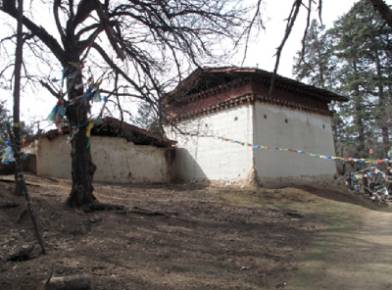 Ringa Temple is on a sacred hill located to the south-east of Gyalthang (Zhongdian) Town. Ringa hill is encircled by a rammed-earth wall about 2.5km in circumference. The locality is very sacred to local people, with many holy places with circumambulation paths, such as a holy spring, blue holy soil, mani walls and stupas. In 2011, the THF team was invited to investigate and document the temple before it was replaced by a new building. Owing to the historical value and cultural importance of the temple, THF proposed preserving it, but the decision makers eventually moved ahead with the replacement. THF conducted a survey during the demolition of the temple, which were later used to produce architectural drawings.