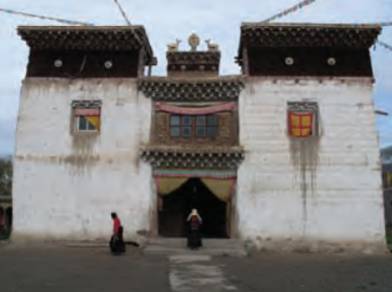 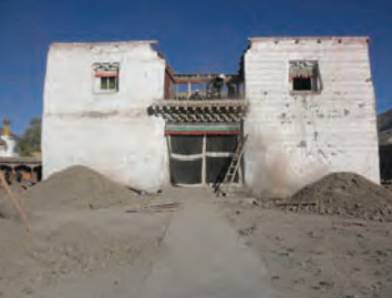 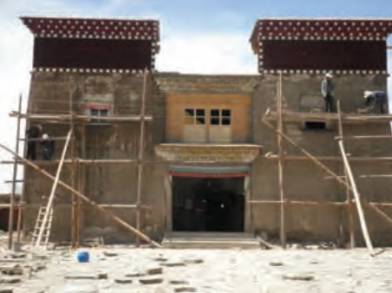 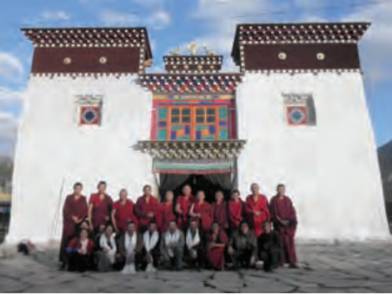 The Langthang Dolma Lhakhang is one of the 12 temples built by emperor Srongtsan Gampo in the 7th century to pin down the demoness seen as underlying Tibet; these temples are strategically placed across the Tibetan empire and their locations seem to define the extent of the empire at that time. The Langtang Dolma Lhakhang was built on the right hand of the demoness. The present standing building was reconstructed during the 17th century at the spot where a 7th century Dolma image was found after a mudslide destroyed the original temple nearby. In the 50’s the temple was converted into various non-religious usages. A simple restoration work was carried out in the 1980s locally. In September 2009, THF visited the site and assessed the building condition, to start preparing the necessary restoration materials. Timber for structural elements and penma bushes for the penbey frieze were collected locally by villagers and nomads. All materials were stored in the monastery, to be use in the restoration in 2010.

In 2010, THF started with bundling the penbey (span bad) twigs. The bundles were cut in middle and the cut ends were coloured with red iron pigment, called za in Tibetan. Za color works as insect repellent and protects from natural weathering. The 1.3m high roof parapet was repaired once in the 1980s, but was sagging already. We removed it piece by piece and selected elements that could be re-used. The carpenters also carried out structural repairs. One problem found was the lintel above the rapsel window on the façade, which was bent due to heavy roof weight. It had to be replaced and weight was redistributed. After the numbering of wooden parts, wooden partitions and rafters on the roof level were dismantled. The carpenters jacked up the main beams to replace damaged pillars and adjusted their positions. Beams and rafters were re-arranged, and two additional rooms for monks created.
Traditional lattice windows were made to replace the 1980s windows. After completing the external support structure for the parapets, the bundled penbey twigs were fixed with tsalu wooden nails. The backside was fixed into a rammed earth wall. Roof drainage was improved with additional spouts. After the structural repair was completed, the entire building was re-plastered, wooden elements painted and walls whitewashed. Finally, a new stand for the dharma wheel and two deer symbol was built. The monastery contributed with stone paving for the courtyard and external circumambulation path. The monks organized quarrying flat stones for the paving ,matched with the restored building and so keeping the historic atmosphere.

This project was supported by Trace Foundation and MISEREOR.