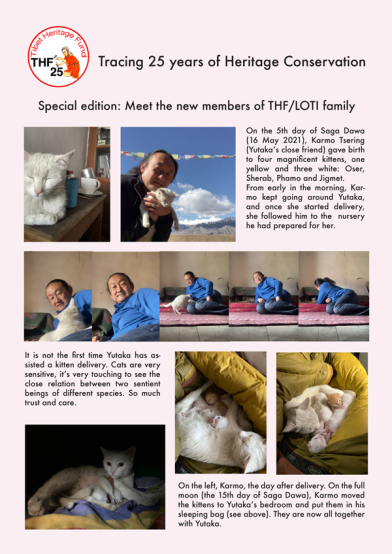 On the 5th day of Saga Dawa (16 May 2021), Karmo Tsering (Yutaka’s close friend) gave birth to four magnificent kittens, one yellow and three white: Oser, Sherab, Phamo and Jigmet.
From early in the morning, Karmo kept going around Yutaka, and once she started delivery, she followed him to the  nursery he had prepared for her.

It is not the first time Yutaka has assisted a kitten delivery. Cats are very sensitive, it's very touching to see the close relation between two sentient beings of different species. So much trust and care.

On the left, Karmo, the day after delivery. On the full moon (the 15th day of Saga Dawa), Karmo moved the kittens to Yutaka’s bedroom and put them in his sleeping bag (see above). They are now all together with Yutaka.
[back]
Copyright, Tibet Heritage Fund