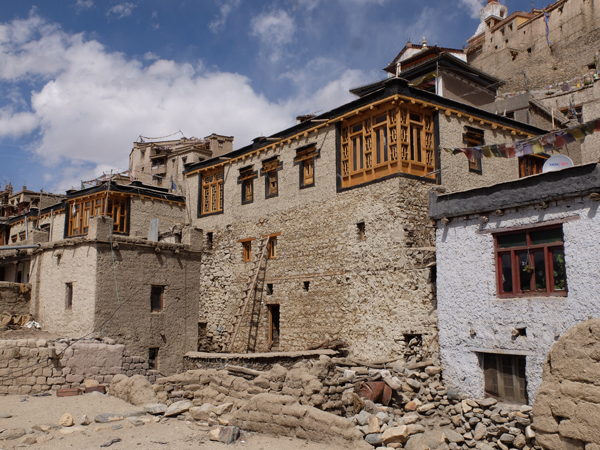 Dzomskit house means ’Happy gathering’ house, it is three storied and built on the rocky slope in the Kharyok area, in the same alley as the Kushu house. Mr Sonam Rigzin, the house owner requested us to repair the old part of the house while still preserving the historic elements and characters. The old part of the house preserves the original spaces of the winter kitchen Changsa and the summer kitchen room Yal-khang with attached storage space and a shrine room.
The old house was quite dilapidated. A large area of the roof was severely damaged and most of the stone walls were weak and damaged, making it necessary to dismantle part of the building.
In 2015, we start the restoration work by dismantling part of the building. First, we removed the roof and floors and dismantled the weak walls. After releasing the structural weight, we repaired and adjusted the structural walls to stabilize the upper part of the building. Also, we renewed the sketching, a reinforcement timber belt between the walls that stabilizes the wall and gives resistance to earthquakes. This technique is widely used in traditional Ladakhi buildings.
During the wall repair we fixed the door frames and lintels for the windows and doors. Later, we laid the rafters between the walls and covered the ceiling of the ground floor. The masons continued to build up the stone wall until the 1st floor ceiling level. On this floor, we slightly enlarged two window frames and fixed one rectangular window for light improvement.
In 2016, the restoration work continued and we constructed the second floor and the west part of the house. Due to failures of the original structural balance of the building, we rearranged the room layout on the second floor. We made a large glass room on the east side, and shifted the summer kitchen to the centre. The original windows were kept in the building façade and sky-lights were made to improve the natural lighting of the room. Subsequently, we worked on the west side of the building. In this part was the original staircase but later this was modified by the family and made into composting toilets and a simple bathroom using temporary building materials. We shifted the toilet and bathroom to the first floor and created an extra room on the top floor. Three rooms on the second floor are accessible through the central courtyard. After structural repair work, we finalized the indoor work. The carpenter fixed the windows, doors, wood partition, pillar-table, skylights and kitchen shelves and the plumber and electrician laid pipes and installed wires. The mason made the parapet, roof, floors and plastered all the walls. We finalized the work by whitewashing the exterior wall and oiling all the timber parts.
Dzomskit house restoration work was completed and the house was handed over to the family.

Currently the Alliance Francaise use the house as their Center in Leh, Ladakh, attracting many young people and students.