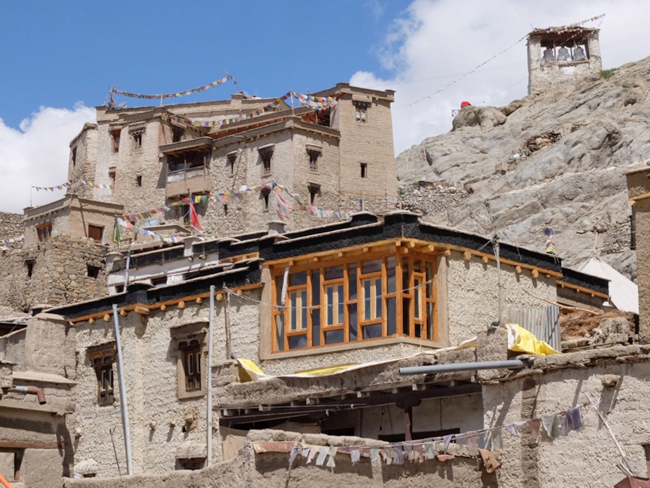 ‘Kushu’ house means ‘Apple’ house in the Ladakhi language. Long ago, one of the great grandmothers of the family served in the royal palace. She had very red cheeks and was nicknamed “Ms Apple” by the queen. Since then the house is known as Kushu house. Kushu house is located in Kharyok area (below the palace) in Leh old town. It is a three-storied house with a dozen rooms consisting of stores, stables, living rooms and kitchens and it has fine architectural details; clay stoves, wooden shelves, and decorated windows. Due to being abandoned, the house decayed and became inhabitable for a long time. The general condition of the building was extremely poor. The west part of the building had totally collapsed, all that remained was a pile of debris, while roof had extensive damage due to water leakage. In 2014 the current owner of the house Mr Tsering Namgyal requested THF/LOTI to help with repairing the house.
Kushu house restoration work began in 2015. Before starting, the Kushu family arranged a religious ceremony called Alshok, this seeks permission from the land god and prays for safety during the construction. The restoration work started by repairing and stabilizing the weak walls on the ground floor. Part of ground floor stonewalls were loose with cracks and parts of the wall had become detached. It was necessary first to consolidate the wall before further building progress could be made. Since the west part of the building had already collapsed earlier and been only temporarily reconstructed, we rearranged the space and re-created the rooms. We fixed large windows to improve the lighting inside of the house. Meanwhile we worked on the structure, broken timber elements were replaced, bent pillars and beams were adjusted, and the weak adobe walls on the upper floors were repaired. One of the challenges was determining how to save the original clay stove during the structural repair work; for that we carefully lifted up the clay stove and moved it to one side by rolling it over wooden trunks, then after repairing the floor, we replaced the stove undamaged in its original position. It took a great deal of care not to damage or crack the fragile old stove.
We also improved the natural light of the house by opening some interior windows and a rooftop skylight. We designed two light-wells to bring natural light into the middle floor, this area contained dark storage rooms before. We reorganized the composting toilet space into a washing room, shower room and toilet. Above this space, which was an open terrace, we made a glazed room with an attached modern kitchen. This part of the house was upgraded with modern facilities. Finally, we covered the roof and completed the main part of the structural work.
In 2016, we continued the restoration work to finalize the structural intervention and the interior details. The masons made the parapets along the roof, and built a new Yaps gallery above the staircase on the rooftop. Meanwhile, the carpenters prepared the window shutters and door boards and also made railings, wooden stairs, shelves and skylights for the whole house. In Kushu house, we made the first attempt at making a light-well, which is an innovative sky-light that brings the natural light to lower floors. We designed a prism frame with an aluminium leaf and Tibetan paper to create light refraction. The result was excellent, and improved the natural light without changing the original small windows in the house façade. Also we put in a modern kitchen sink and a shower in the house, plumbing work was made accordingly. One of the storage rooms was renovated into a home library and a large bookshelf was fixed in the room. The electrician did the electrical work and the mason followed with the plastering of the walls. Finally we treated all the timber parts with linseed oil and whitewashed the exterior wall.
Kushu house was successfully restored. This project was an example for the community on how an old historic house can be adapted and fitted with modern facilities. The restored Kushu house attracted many visitors and became a showcase for other restoration projects in the old town and Ladakh.

THF/LOTI uses Kushu house for cultural activities, workshops, talk events and meetings for the local community. It is also the location of PY studio where we produce architectural designs and promote vernacular architecture.