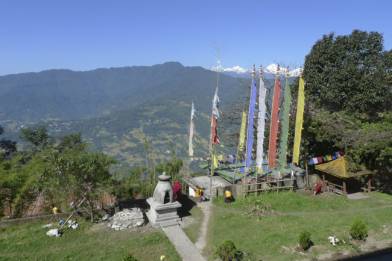 Sikkim is a former independent kingdom, nestled between Nepal and Bhutan. Tibetan religion and culture have dominated Sikkim since the 13th century, and in the mid-17th century, three Tibetan lama-s crowned the first king, a Tibetan from Minyak in Kham.
In 1975 it became a State of the Indian Union under controversial circumstances. Strong shifts in population patterns have led to a decline of the Sikkimese language (a Tibetan dialect similar to Bhutanese) and culture. Nevertheless, the region preserves over a hundred Buddhist temples and monasteries.
Because of the wet climate (6 months rainy season) historic buildings and wall-paintings are particularly vulnerable. Over the past 25 years, a large number of historic monasteries have been reconstructed in concrete, and conservation has been unheard of.
HRH Princess Hope Leezum of Sikkim initiated conservation of Sikkim’s heritage, and invited THF’s Andre Alexander to the capital, Gangtok, in late 2010. 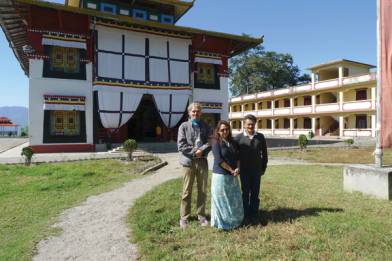 Gangtok Tsuklakhang Project
Close to the former royal palace (today a residence for lama-s) stands the Gangtok Tsuklakhang, the central Buddhist temple of the town.
It was built in the 1920s, and the wall-paintings were done by some of the best painters of Tibet, sent by the Tibetan government. After 1975 palace and temple were transformed into a non-profit trust.
The wall-paintings have become extremely soiled from soot (butter lamps) and because a varnish applied decades ago has darkened.
A project to restore the paintings of the Tsuklakhang, as first restoration project in Sikkim, was successfully carried out from 2011 to 2013 - the report is available here

More projects were implemented in 2012 and 2013, particularly to provide assistance to historic buildings damaged in the 2011 earhquake.