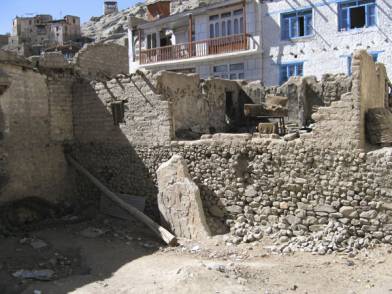 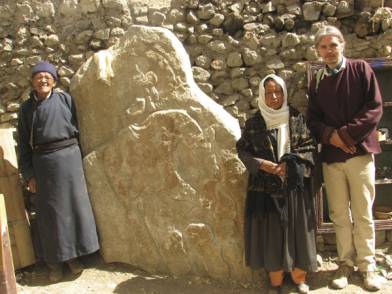 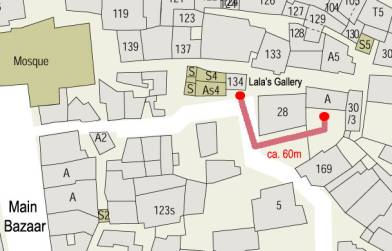 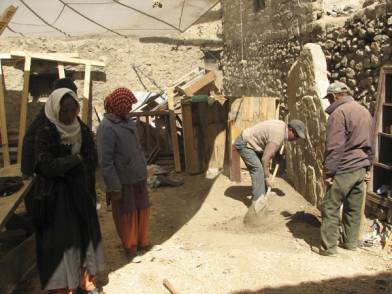 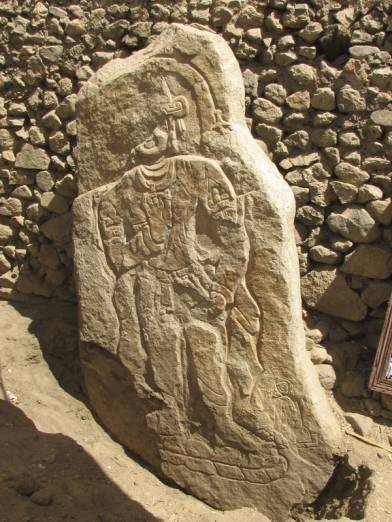 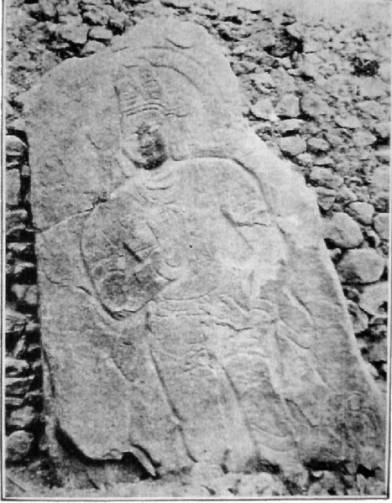 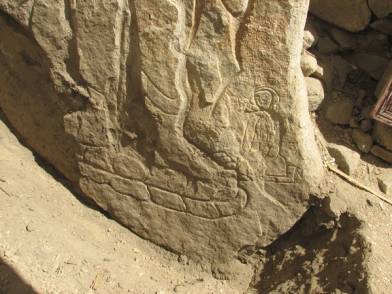 Numerous rock carvings constitute an important evidence of the early Buddhist artistic heritage of Ladakh. These carvings can be found on large rock boulders along pathways, such as those of Mulbek and Shey (see also Puntsok Dorje's exhibition about early Buddhist rock carvings), or on slim stone steles (rdo-ring). Generally, not many can be dated precisely. In his paper, EARLY BUDDHIST HERITAGE (in: Bray, J. (ed.), Ladakhi Histories, Leiden & Boston 2005: Brill), art historian Christian Luczanits states that "although some of the major carvings have inscriptions carved beside them, their fragmentary state does not give secure clues to their historical setting. This means that the primary assessment of these carvings is based on historical assumptions and associations, often combined with an evaluation on the basis of art historical criteria. Generally, rock carvings tend to be attributed to comparatively early dates."
A rock carving that is depicting Maitreya Buddha (though locally it has been claimed to be the Bodhisattva Avalokiteshvara) has been found in Leh. It depicts the deity in two-armed standing form with a female donor praying to his left side (a corresponding figure to his right is thought to have been lost) and an inscription on a boulder that measures roughly 2.50m in height, 1.60 in width and 60cm deep, its weight calculated to be around 3 tons. On the back is a rough carving of a stupa. A THF team recored the image for its old town survey in 2003, standing half-buried in the yard of the Tak family and facing south. Restorer Patrick Juergens analyzed the stone in 2008 and found it to be damaged and threatened by salts rising up into the stone from the soil. The yard belongs to a dilapidated house no longer in use, and apparently the street dogs of old Leh frequent the place. Patrick stabilized the carvings and recommended that the image be raised. The Tak family themselves (not being Buddhist) preferred to move the statue altogether. In early 2009, the historian Sonam Puntsok from Achinatang proposed that the statue be moved to the nearby Manikhang area (where already three stupa-s and five stone Buddha images stand), and the local residents proposed to move it to the front side of the former Sankar Labrang (today Lala's Gallery, a Heritage House for Leh operated by THF), so that people could see it, circumambulate it, light lamps in front and it would be still facing in the same direction as previously. Historically, the image stood at the edge of Leh, facing the fields that surrounded the town and having the former city walls and stupa gates to its backside. THF agreed to organize the moving. As the statue was completely built in by new development, staff Mr. Sonam Gyatso secured the agreement of the Khamal Khan family to temporarily demolish two mud brick walls to create an opening.
On May 25 THF mobilized its workforce of 35 Ladakhi, Nepali, Bihari and Doda (Jammu-Kashmiri) artisans and staff. They were organized by carpenter Sheypa Dorje and mason Lal Singh, and the entrie activity was supervised by THF experts Patrick Juergens, Michel Radon and Andre Alexander. The image was dug out, and wrapped in polyfoam sheets for protection. It was then lowered onto layers of rafters that were then used to slowly roll the statue out, in a technology copied from the ancient Egyptian builders of the pyramids (to people who believe the pyramids were build by aliens: look at the pictures to see how it's done, we're not aliens!). It took the whole day to cover the 60 meters to Lala's cafe, when the exhausted workforce covered it and retired for the night. The next day we decided to let a local recovery van lift the statue up to its final place, with a stone stand already prepared (so that polluted ground water cannot reach the stone). A little stone table was built in front for offerings and butterlamps.
Martin Vernier and Laurianne Bruneau have kindly let us know that Francke had found the image in much better condition in 1907 and supplied a photograph taken by P. Bernard and published by Francke in the Indian Antiquary April 1907 vol.XXXVI.
I am indebted to Sam Vanschaik of Oxford and my good old friend Matthew Akester for having suggested a very preliminary reading of the inscription.
Sam in particular says that as well as the reversed gi-gu, the shapes of certains letters, like ga and ra, are similar to Tibetan inscriptions from the 8th-10th centuries.

Sam suggests that the first line refers to the deity here as Arya-Maitreya ('phags pa byams pa). The rest of the inscription seems to express the hope that the merit of setting up this image and making offerings will purify the arrogance [sgrob pa? this part is hard to make out] of the lord and his servants [rje gol -- this is an archaic term]. These are very preliminary readings.