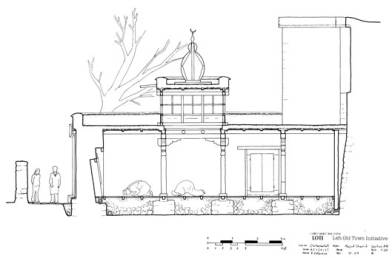 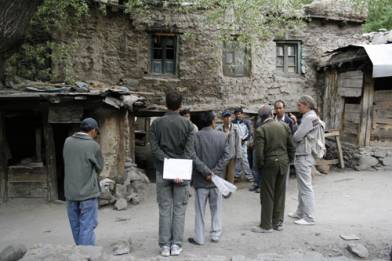 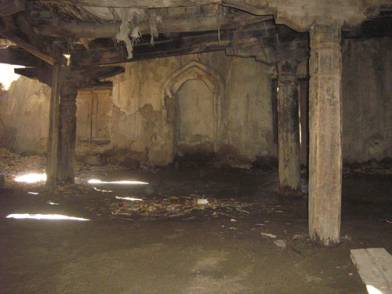 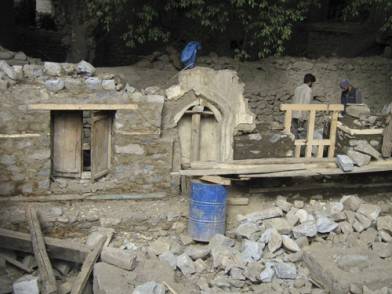 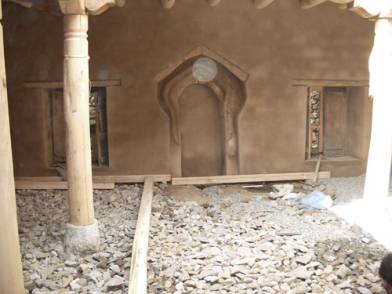 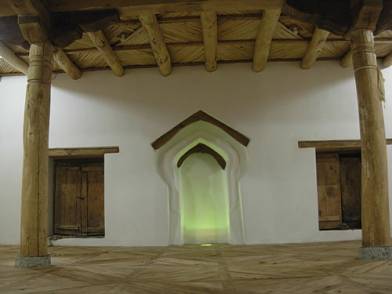 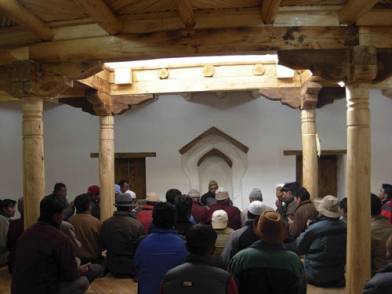 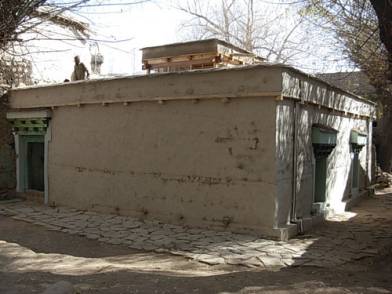 In 2Completed Masjid, interior0Re-consecration and first prayers November 200707, THF/LOTI, the Anjuman Moin-ul Islam Society and Intach J&K completed the first step of the rehabilitation of the Tsa Soma area of Leh. This area, whose name means "new garden", was given to Muslim traders by king Senge Namgyal in the early 17th century (or by his father Jamyang Namgyal, in the late 16th century), and the first mosque in Leh was built there.
A report about the restoration work can be downloaded here. The next step (2008-2009) will be conversion of the historic entrance building of the Tsa Soma area into a library, and the building of a museum for Ladakh's past history as crossroads for Central Asian caravan trade.


Excerpts from the report:
Masjid Sharif Restoration Report
1.1 Site history
Ladakh has always been a crossroads of different cultures. Permanent Muslim settlements in Leh are said to date back to the reign of king Senge Namgyal (r. ca. 1616-1642). At the time, Muslims were given the Tsa Soma (“New Garden”) area, immediately to the west of the walled city of Leh. The mother of the King was herself a Muslim princess from neighbouring Baltistan. On the land this land, the traders built the Masjid Sharif mosque, the first in Leh. Both Sunni and Shia Muslims constructed places of worship, which still today stand side by side (separated by a wall).
Following the Indian partition 1948 and the 1962 border war with China, Ladakh no longer remained an important crossroads for Central Asian trade. Since that time, the mosque was used as a place of worship by women. It also served as a Madrasah (Koran school). Today, many elderly Leh Muslims still remember how in their childhood they studied here their Holy Scriptures. The small agricultural stream which flows through the area was used to perform the ritual ablutions before prayers.
Perhaps because it was built in close vicinity to channels belonging to Leh’s water system, and also near to a pool used to store irrigation, water infiltration caused severe damage to the walls and timber frame of the site. Finally it had to be abandoned in the early 1980s.

1.2 Site location
A small foot path leads from Leh’s Main Bazaar to the west. After a few meters the Chutayrangtak Street branches off to the north, named after water mills that were once widely used in this area (now replaced by motorized flour mills). A fallen tree, considered sacred to Buddhists and Sikhs, creates a kind of natural gate to the area.

1.3 THF / LOTI involvement
In late 2005, the owner of the Sofi House in old Leh that has just been restored by THF, proposed that we also work on the Masjid Sharif. The Anjuman Moin-ul Islam Society, the official owner of the mosque, then officially proposed to undertake the project in co-financing. In 2006 THF made a survey and developed the intervention plan. Intach J&K were also consulted and supported THF‘s proposal. The embassy of Finland provided half of the budget, and the Society matched these funds. In 2007 work could begin.

2.1 Intervention principles
The fundamental principles for the restoration work were the use of mostly traditional materials, and the employment of local artisans. To maximize authenticity, as much as possible of the historic building (even if it was ruined) was to be retained, and the original elements and materials would be re-used.
In this way it would be also possible to demonstrate that effective use of the traditional Ladakhi buildings materials, such as mud, timber and stone make most sense in the local environment, and could today be termed eco-friendly. Timber for construction is locally grown and sustainably harvested, for example. The expert use of mud for walls, plaster and insulation gives traditional buildings excellent climatic qualities. In a seismically-active area, Tibetan and Ladakhi buildings have survived earthquakes for many centuries.
Especially in the fragile environment of Ladakh, this aspect of restoration and construction is important. Our experience in working with historic buildings in the Himalayas shows us that the traditional skills and experience, handed down by many generations, is still the most sustainable way to build. For every improvement, we first need to see if it is possible to employ traditional technologies and materials.

2.2 Intervention planning
To understand the present condition of the building, we had to identify the causes of the damages, and solve these.
Water is the traditional enemy of mud houses, and in our case there was extreme infiltration from the ground below. This could be explained by the presence of a plethora of underground irrigation channels as well as a storage pond nearby. It is also possible that the mosque was built on marshy grounds in the first place, as proper ground for construction has historically been very scarce in Leh.
We have decided to remove the wet soil, and lay a bed of gravel to keep away the moisture. French drains (half-open pipes) were laid below the gravel, collecting water and leading it away. The foundations of the walls would be extended, and all timber elements places on long stones. The east side is today located beneath the Chutayrangtak alleyway level, and so particularly susceptible to infiltration from an irrigation channel below that street. Following a request from the Anjuman Committee, the channel was sealed with concrete lining by the government. From our side, we built a second wall next to the one that is partly below ground, to have a layer of ventilation.
Several wall-sections have historic clay mouldings on the interior: the mirhab prayer niche and a lamp stand. Our aim was to preserve these.
The Committee requested to increase the height of the building. The original size barely allows a man to stand upright. This is a common problem of very old buildings in Ladakh, as large pieces of timber have always been expensive. Since we would be placing the restored timber frame on new stone foundation stones, it would be easy to raise the ceiling height. The roof composition of willow stick joists and soil layers would be improved, according to our experience. Additional layers of pure clay help to water-proof the roof, and a layer of straw mats prevents dust from falling through the joists.
The missing dome would be placed on a traditional skylight to make the room more light. Together with the committee, the new dome would be designed based on the Kashmiri style, which is the oldest in the region.

The re-consecration and first prayer took place on 13 November 2007, after many months of hard work, with the senior imam of the Leh Sunni community leading the prayers. It is planned in the future to give this moqsue to the muslim women community of Leh.