Tibet has produced one of the world's most unique and easily-recognizable forms of architecture. Nevertheless, systematic study of Tibetan architecture is still a comparatively unexplored field. 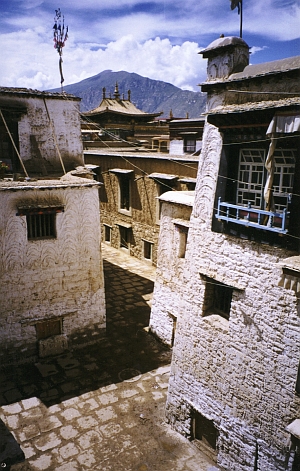 Tibetan construction activities can be traced back over 1300 years, when the first Buddhist temples were built in central Tibet. One of these, the Lhasa Jokhang, still exists and yields important information about the origins and early development of Tibetan architecture (see architectural history of the Lhasa Jokhang

The earliest surviving Tibetan religious monuments are closely based on Indian prototypes. Later temples and monuments, built after the period of the second diffusion of Buddhism, are very similar to Tibetan vernacular architecture. They show only limited foreign architectural influences. The earliest extant defensive structures appear likewise to be based on indigenous designs and technologies. 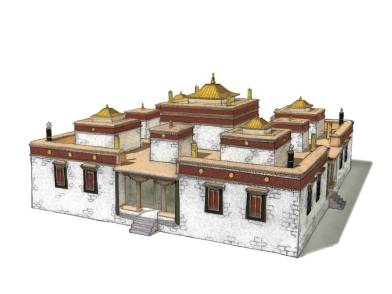 Tibet has perfected its own unique style of architecture.
A handful of standardized principles give Tibetan buildings their characteristic organic design. These include:

Symmetries in lay-out and façade design,
Slightly trapezoidal form, heavy at the bottom (stone foundations) and light at the top, generally with battered walls,
flat roofs with parapets,
Detailed code for the decoration of doors, windows and parapets (including
painted black frames around doors and windows, and complex wooden overhang decorations),
Intricately carved interior timber frame following standardized design principles
Organic design – buildings appear to grow out of the landscape

Tibetan buildings are not only a fascinating blend of man-made structure and nature, but they are well-suited for local climatic and geographic conditions. After they have outlived their usefulness, every part can be re-used, and if lived to decay, they simply become hills of earth and stones again.

For nearly a millennium, Tibetan architecture was the preferred medium for construction of monasteries and palaces across much of Inner Asia, including northern India and Pakistan, Bhutan and Nepal, northern China, Mongolia and parts of Siberia. The best-known example is the 13-storey Potala Palace in Lhasa, a UNESCO World Heritage Site since 1994.

Modernization and political events have placed this great heritage in jeopardy. Only a handful of authentic ancient monuments and even fewer historic urban structures remain. Adding insult to injury, a huge fascination within China and India for all things Tibetan currently causes a Disneyfication of Tibetan architecture. 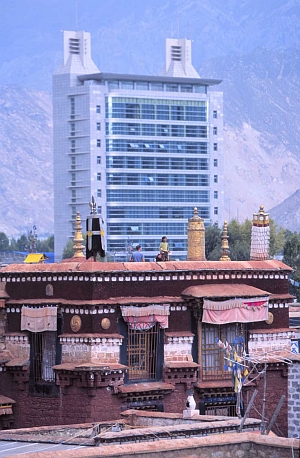 The dissection of the Tibetan cultural realm into nation states with fixed borders, and the political events in China, India and Mongolia in the mid-20th century have caused cultural exchanges within the region to diminish dramatically. Fortunately, the wider influence of Tibetan culture has picked up again in recent decades and has begun to cross once hostile borders. The advent of modern construction technologies, particularly the availability of concrete and steel, have led to a near-termic decline of traditional building skills due to lack of demand. In both Tibet and Ladakh the fixing of traditional-style window ornaments is enough to qualify a building as Tibetan architecture. Little efforts are made to understand the inherent qualities and design principles of traditional architecture. As more and more small and medium-sized Tibetan towns become modernized, traditional residential buildings disappear from the Himalayan landscape.

Saving the vernacular architecture of old Lhasa was the principal interest that led to THF's founding. THF has launched a project that is still running to document vernacular (and monastic) Tibetan architecture in all areas belonging to the Tibetan cultural realm. The documentation includes photography, survey and measured drawings, as well as investigations of building use, social functions, cultural context and practical issues of conservation and rehabilitation. 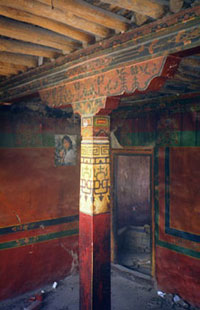 THF's survey archive contains data of almost 100 historic residential buildings in Lhasa, many of which no longer exist.

THF works to contribute to a better understanding and appreciation of traditional architecture and traditional skills across the region, which would also significantly contibute to local economies.