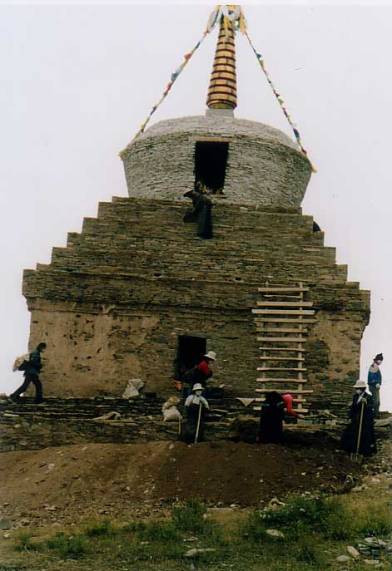 Labu monastery is situated in Chenduo county Yushu TAP Qinghai. It was founded by Tsongkapa's student, Darma Rinchen, in 1419 and so is one of the earliest and most significant Gelukpa monasteries in Qinghai. The Thirteenth incarnation of Darma Rinchen extended the monastery. It was famous for its stonework, one of the few areas in Qinghai where the quality of the stone masonry rivals that of Lhasa.
After 1958 the monastery was destroyed, with only ruins left. The centre of the monastery is still in ruins, but a new assembly building has recently been completed, built almost entirely in concrete.
THF's Pimpim de Azevedo, Lundrup Dorje and Yaqin visited the site and made a survey. THF had discussed with the local community and Yushu TAP officials the importance of organising a reconstruction of the monastery around as much original substance as possible, and the monastery suggested to begin such a project with the remains of a stone chörten (stupa) that possibly dates to the 15th century (see appendix for survey of the stupa). Yutaka Hirako carried out the necessary research to design the restoration of the stupa. THF the organized a team of well-known local stone masons supplemented by Lhasa's Choechok and restored the stupa. The original base and all surviving stone work were successfully retained and integrated.