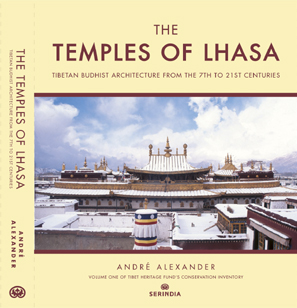 SKU#: 8
Price: 65.00
Description: The Temples of Lhasa is a comprehensive survey of historic Buddhist sites in the Tibetan capital of Lhasa. The study is based on the Tibetan Heritage Fund's official five-year architectural conservation project in Tibet, during which the author and his team had unlimited access to the buildings studied. The documented sites span the entire known history of Tibetan Buddhist art and architecture from the 7th to the 21st centuries.

The book is divided into thirteen chapters, covering all the major and minor temples in historic Lhasa. These include some of Tibet’s oldest and most revered sites, such as the Lhasa Tsukla-khang and Ramoché, as well as lesser-known but highly important sites such as the Jébumgang Lha-khang, Meru Dratsang and Meru Nyingpa. It is illustrated with numerous color plates taken over a period of roughly 15 years from the mind-1980s to today and is augmented with rare photographs and reproductions of Tibetan paintings. This book also provides detailed architectural drawings and maps made by the project. Each site has been completely surveyed, documented and analyzed. The history of each site has been written – often for the first time – based on source texts and survey results, as well as up-to-date technology such as carbon dating, dendrochronology, and satellite data. Tibetan source texts and oral accounts have also been used to reconstruct the original design of the sites. Matthew Akester has contributed translations of Tibetan source texts, including excerpts from the writings of the Fifth and Thirteenth Dalai Lamas.

Read the review at http://jaar.oxfordjournals.org/cgi/content/citation/lfm047v1.