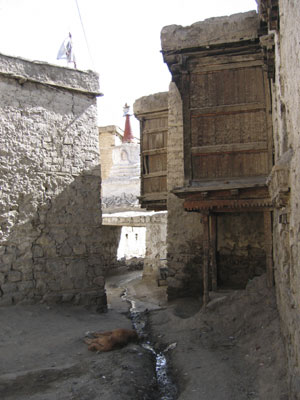 The Conservation Model Street Project was devised by THF in 2005 to demonstrate our vision how a rehabilitated old town could look like one day. Our social surveys revealed that residents overwhelmingly cited the bad infrastructure in the old town as most urgent problem. So we picked an alley both with important historic buildings and bad infrastructure (no paving, no drainage) to show that building rehabilitation and infrastructure improvement must go together.

The area that was chosen as model area is an alley in the Stagopilog area, which serves as one of the main access routes into the old town. Used both by locals and residents, it leads underneath an old stupa gate and past some very handsome (if dilapidated) houses. The lane has had no paving and no drainage. Stagopilog lies at the bottom of the slope on which the old town is located. A drainage channel from the neighborhoods above ends abruptly at the upper end of the alley, emptying into it. As a result a constant stream of foul-smelling water runs down the unpaved alley, and pools of stagnant waste water regularly accumulate between the homes.
Already, during our 2003-2004 survey, we were told that the community was troubled by the lack of drainage. In early 2005, THF organized a number of community meetings. We learnt of several earlier attempts to solve the problem. Residents had begun to pave part of the alleyway, but they had miscalculated the slope and now rain and drain water was trapped between two houses, seeping into foundations. Soakpits built to absorb the dirty water filled up with silt and garbage and failed. 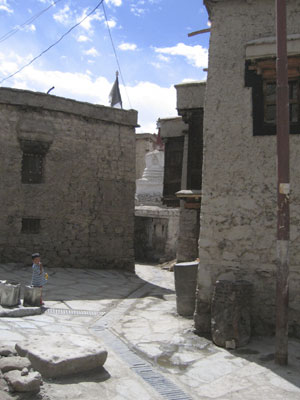 Recognizing that there have been genuine attempts that failed because of lack of technical skills, we next organized a special community meeting. We also invited the engineer John Niewoehner, with whom THF worked together in Lhasa on comparable neighborhood upgrading. Bringing representatives from all affected families plus technical experts plus one government engineer together, a drainage and paving project was designed jointly by the community and the engineers (who translated the community's ideas into circulations and drawings). Several difficulties had to be overcome. During the winter, the running waste water would freeze, and new waste water would freeze on top, and for most of the winter a layer of ice up to 40cm thick would cover the alley. The ground is partly rock, with a thin layer of top-soil, so that the drain could not be laid deep enough to prevent freezing. Since the nearest garbage collection point is far, a lot of solid waste like vegetable cleanings, packaging material etc would clog the drain, therefore it had to be accessible for cleaning. The government does send sweepers into the alleyways, who collect garbage in wheelbarrows.
Eventually, it was decided by all that the drain would be up to 70cm deep (or as much a possible to arrive at a necessary slope), and covered by removable metal grilles. These would let in rainwater, but no solid waste. The point where the higher drain from the next neighborhood leads into the new drain would have a special sieve that would catch the solids usually swimming in the waste water. We requested that the paving be made with slate stone, instead of the concrete tiles so favoured by the Indian government. This suggestion was taken up by the residents and engineers, who all thought natural stone was a good material.

Building the drain with community involvement
The cost estimate arrived at a staggering 4 lakhs (ca. 9300 US$) for the length of approximately 300 linear foot of covered drainage channel and approximately 4000 square feet to be paved with slate stone. Since the residents already had to provide 50% co-financing for building rehabilitation, they expressed themselves unable to contribute any cash. 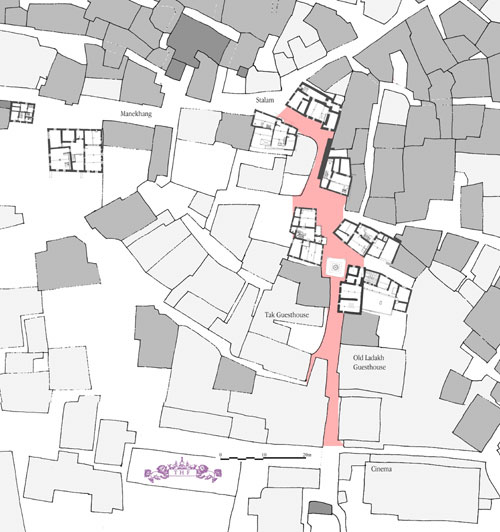 To start the process, after more than 10 years of waiting for the government to do something, we wanted the residents to build as much as possible of the drain. However, he technical challenges involved were considerable. The slope would have to be meticulously built to obtain sufficient flow. Concrete would have to be well mixed and cured to be strong enough to last decades. The stones for the paving would have to be well-cut and well-placed to prevent people from tripping over rough edges.
The community members put in work for the drain digging and removing of soil, but many aspects of the work would have to be carried out by professionals or semi-professionals. The residents would be able to learn as much as possible about drain building on this stretch, which after all is only a first pilot project. For future drain projects, the contributions by residents could increase considerably. We then set out to find suitable workers, and negotiate reasonable rates. Several weeks of negotiations and revisions of the design ensued.
Completed phase of the project
Work began on July 1 2005. The residents prepared by hauling away soil. This was organized in such a way that every family in the community would have to send one member. It was mostly the women who came.

During the work, we also uncovered the truth behind some Ladakhi legends. Already during the 2003 survey, we were told that a huge rock lay buried underneath the alley since several hundred years. When Senge Namgyal, one of the greatest Ladakhi kings, built his palace around 1600, he had high-quality quarried stones brought from different parts of the country. One such rock arrived from the village of Basgo. However, the team carrying it arrived too late, and Leh's city gates were already closed. Therefore, it was dropped at the present spot (indeed just in front one of the old gates) and never used. Incredibly, the stone was indeed unearthed at that very spot, fitting the descriptions we had heard in every way. John the engineer had even heard an alternative story that very much seems to have become (or been taken from) a popular folk tale:

According to the folk tale, the king of Leh sent someone with a message to the ruler of Basgo, some 50 kilometer to the east of Leh. Unfortunately, when the messenger reached Basgo, he could no longer remember the message to be delivered. Upon hearing this, the Basgo ruler decided to teach the messenger a lesson and told the messenger that he knew what the king of Leh wanted. He told that messenger that the king wanted a big rock and the Basgo ruler instructed the messenger to carry a huge rock back to Leh. According to some local residents, the rock in the alley is the very same Basgo Stone carried back to Leh by the forgetful messenger.
Besides the stories behind how the rock got there, there are also stories about the indentations in the rock. One person told us that the indentations were made by people who used the rock to sharpen their tools. Another person told us that the circular holes were created by the spools used during the spinning of wool. Still another person told us that the rock was used a table for gambling and the indentations were created from the sliding of the pebbles used in the game. Some people also ponder the large indentation in the middle of the rock that looks like a footprint. Is it possible that a holy being left the footprint as a reminder of a visit to Leh?
Regardless of how the rock got there in the alley, the rock continues to be important in that it instills a sense of community pride and serves as a reminder of the long rich history of Leh.

We decided to put the stone on top of the paving so that it would be visible. , enabling people gathering in the alley to sit on it if they wished.

Tapstand
A naked pipe with a tap at the end stood in a little square in the upper half of the alleyway. Every morning, the tap supplies water for about 30 minutes. THF have built a tapstand made of stone with a small basin area below around this tap, based on similar designs made by John the engineer in Lhasa.

Results of the project
The community spirit has been clearly enhanced. People are now used to meet and discuss problems, and even to perform physical labour together. The drain and paving completed so far have led to a significant clean-up of the area. With the round no longer smelly and dirty, we observed that regularly in the late afternoon, the women of the neighbourhood gather around the Basgo stone, sit and chat. Remarkably, these women are from three different communities � Ladakhi Buddhist, Ladakhi Muslim and Indian lowland migrants. Several houseowners have donated pieces of their land for communal use (though some have admittedly resisted and prevented their land being used). Several obstacles were jointly overcome, or have led to revisions of the original plan.
One government agency, the Block Development Office, has promised 1,5 lakh for THF to organize similar works around a Buddhist monastery in a different part of town next year. The then- Chief Executive Councillor (head of the local government) Mr. Rigzin Spalbar visited the project and said that to his knowledge, this was the first such project to his knowledge where an investment was made to upgrade a part of historic Leh. He said that the local government would work closely with THF to work out a legislative and organizational framework for the management of the old town area, which would be a prerequisite to get more funding released from the government. Leh has no sewage system, and our drain will end in a large soakpit in front of a run-down cinema hall. The Councillor of Public Works has promised to build an improved and larger soak pit next year, to help clean up the area.
Most residents remain healthily skeptical about government promises, but the work completed so far has clearly made an impact. THF now has the owners of seven homes interested in co-financing building rehabilitation, and we will be discussing with other communities ways to improve drainage and paving in their respective areas. The training program will expand, and we will bring together community members of different areas so that the experience gained in this year's improvement project will be transported and shared.
The larger issues of water supply, sewage system and waste management loom on the horizon. Nevertheless, for our second full project season here in a town where everybody seemed to have given up hope, it was a very successful year that had lead to a visible improvement of the old town.
Now, after a season of pilot projects demonstrating the feasibility of rehabilitating the old quarters, we hope that the coalitions forged during the pilot phase will help to bring all the stakeholders, the concerned officials and various technical experts together to work on a sustainable management plan for Leh.