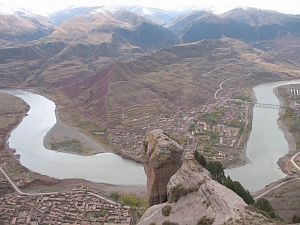 Qinghai, like Yunnan, is one of China’s truly multi-cultural provinces. Part of the historic silk route milieu, different ethnic and sectarian groups, like Han Chinese, Mongolians, Hui and Sala Muslims, and Buddhist Tibetans have lived here together for centuries. Qinghai is also one of China’s least developed regions, with significant income gaps between rural and urban populations. THF works with disadvantaged rural communities living in some of the least developed counties in China.
Tibetan culture has made an impact in the region since at least the 8th century. Most ethnic Tibetan areas of Qinghai belong to the Tibetan cultural region of Amdo, which played a significant role during the revival of Buddhism in central Tibet in the 10th century.
The multi-cultural influences can be found in the physical heritage of the region, with many monuments built in a blend of Chinese, Tibetan and Central Asian traditions.
THF works to preserve this unique multi-cultural heritage of Qinghai, so that it can become a base for livelihood improvement. THF trains rural communities in construction and rehabilitation skills. Finding future employment helps to narrow the income gaps between rural populations and those in larger towns in Qinghai.

Important THF projects in Qinghai include the Ragya Monastery Project, the Achung Namdzong Project and the Labu Stupa Project.