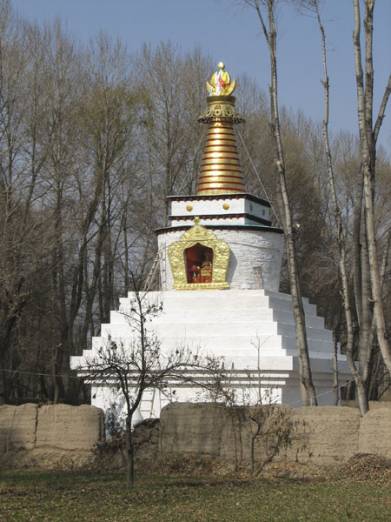 THF assisted the Ragen Trika community to rebuild a Stupa monument in replacement of three historic Stupa-s destroyed during the 1960s. Stupa-s are structures that represent Buddha’s enlightened mind, and each part of the Stupa shows the path to Enlightenment. Stupa-s promote harmony, prosperity, longevity, good health, peace, and freedom from ignorance. They subdue fear, corruption, and pollution, and bring blessings to the environment in which they are built, to those who build them, and to those who visit and venerate them. 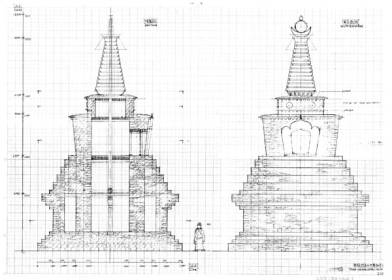 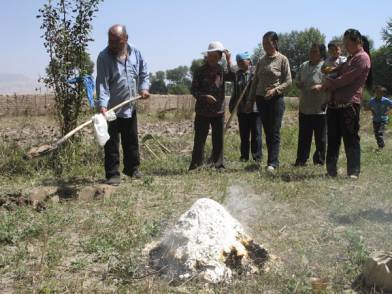 The Trika Stupa was designed by Yutaka Hirako and the Ragen community to be built 15.5m high in solid stone and timber. 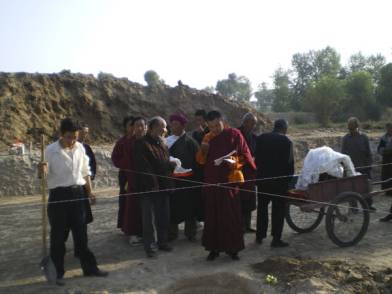 The construction site in Ragen village was chosen by the community, who negotiated the necessary approval from the local government. The community organized the land purification ceremony, according to the tradition this is necessary to obtain approval from the local deity of the soil.
Juniper incense covered with roasted barley flour (tsampa) is offered to the local land deity. The shovel used for digging is decorated with a white ceremonial scarf (khata) symbolizing pureness.
A local lama was invited to perform the prayers and identifying the most auspicious direction for the Stupa. 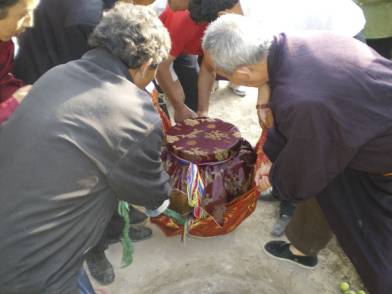 Burial of the “Treasure Vase”, which is filled with grains, precious goods and butter and then blessed. This is an important element of building Stupa-s and houses according to Tibetan custom. 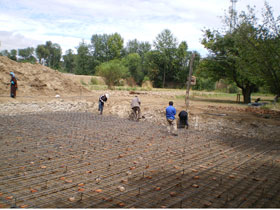 We designed a solid foundation to support the massive weight of the stone construction, and a paved space around where the community can gather for circumambulating the Stupa. 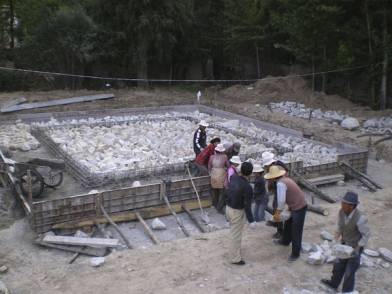 The first layer consisted of 15 square meters of reinforced concrete. On top of that we built a Tibetan-style foundation with granite rubble stone.
The foundation was completed after two months. 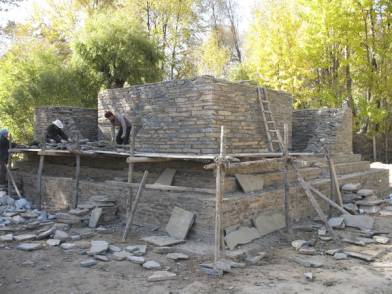 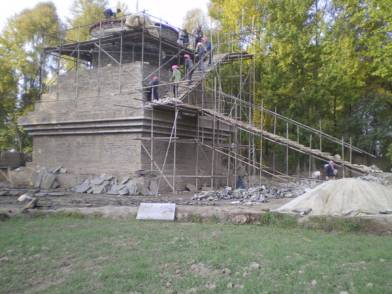 THF insisted that the Stupa be built in the traditional stone masonry for which Tibetans are justly famous. Watching the experienced masons building up stone layer after layer gave encouragement to the watching community.
The square basement, known as the lion throne, took six weeks to complete in traditional masonry.

The round part, known as the 'vase' (bumpa) took less than two weeks. 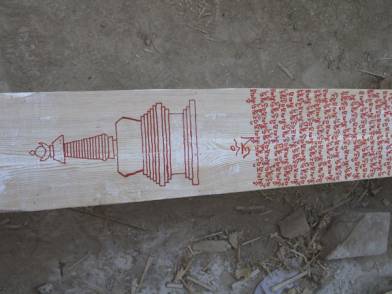 The “sogshing” is the spine of a Stupa, in our case a 12 meter long timber pole.
A monk was asked to inscribe the pole with incantations and symbols. 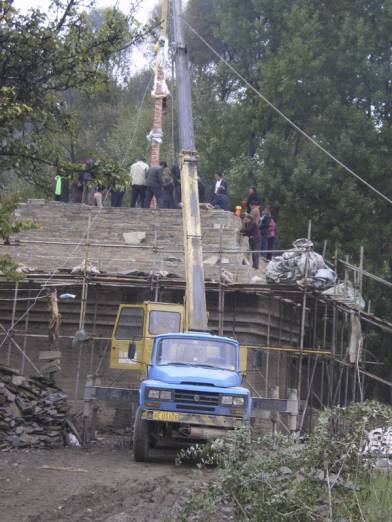 Help of a crane was needed to erect the sogshing, carefully positioning it in the exact center of the Stupa. 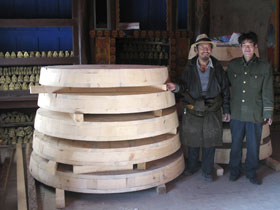 Thirteen rings, in our case huge wooden discs, represent the thirteen steps of Buddhist teaching on the path to enlightenment. 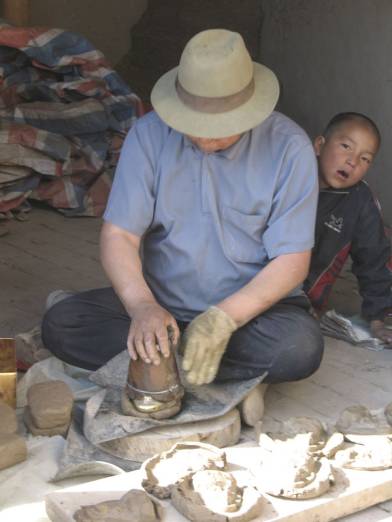 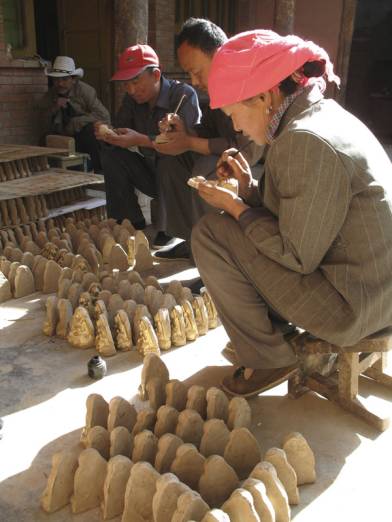 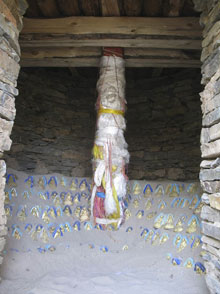 “Tsatsa-s” are home-made votive clay tablets popularly placed in Stupa-s and shrines. The local village community, aided by nomads, produced 100,000 pieces for their Stupa.
Finely-kneaded mud is pressed into the Tsatsa mould. After drying, they are gilded and the eyes and mouth of the main image’s face are painted on each one.
Each family produced their share at home, and only on the day they were to be installed were all the 100,000 brought together.
The Tsatsa-s are arranged in line, and the space inbetween filled with sand so that the next layer can be piled on. 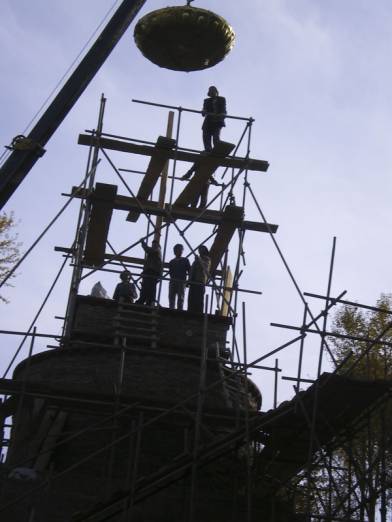 The climax of the Stupa construction: the 13 wooden rings are lifted by crane to over 15 meters high from the grand level and carefully placed around the “sogshing” pole. 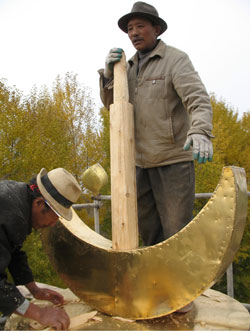 The “moon” element is fixed on top of the last ring. 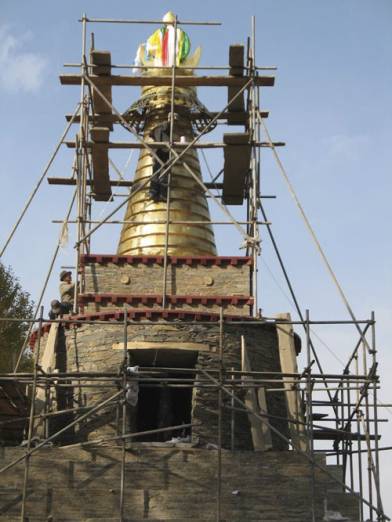 With the 13 rings and the sun and moon elements in place, the Stupa is structurally complete. 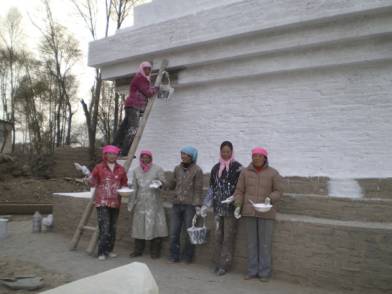 Next, the Stupa was white-washed. 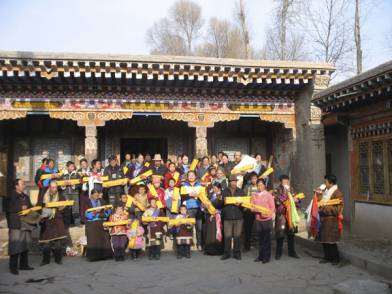 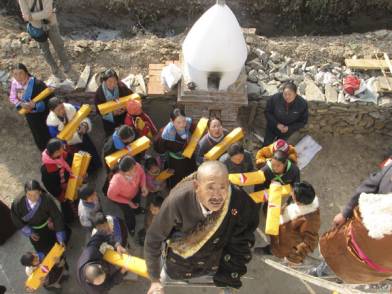 Then, the top of the stupa was filled with a complete set of the Buddhist scriptures. 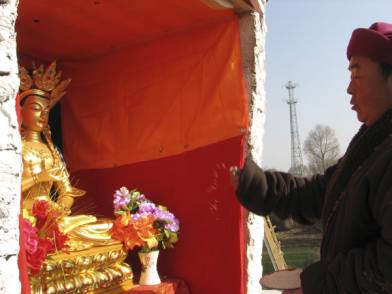 Finally, an image of Vajrasattva (“Diamond mind”) was installed and consecrated. 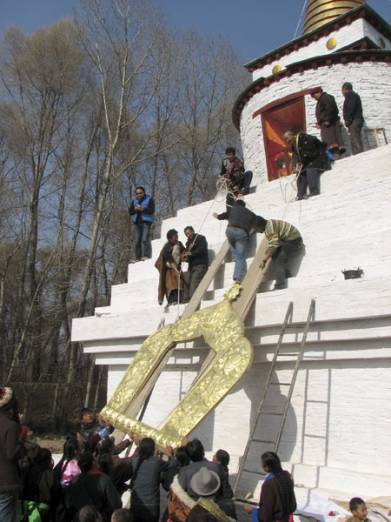 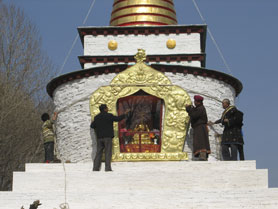 The stupa was closed. 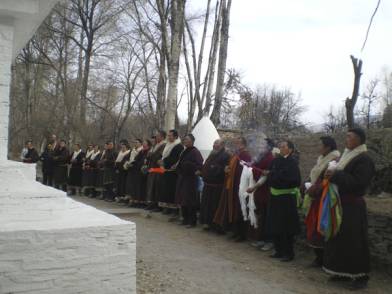 Another prayer ceremony was held for its final consecration 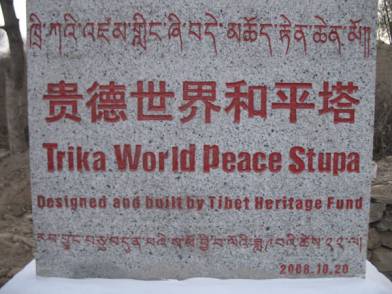 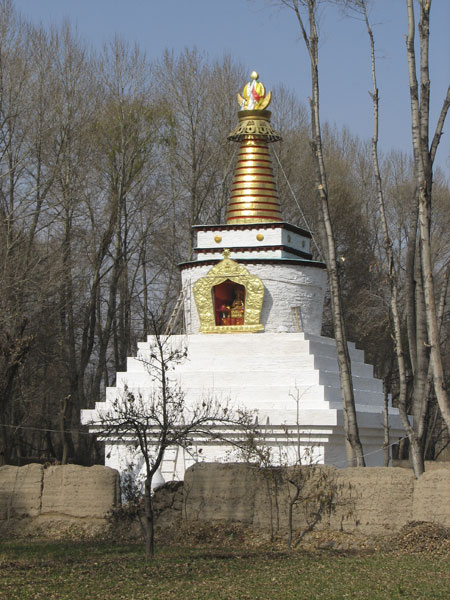