THF-restored Mud House Survives Earthquake
Posted by Andre on 11 May 2010 at 1:39 PM 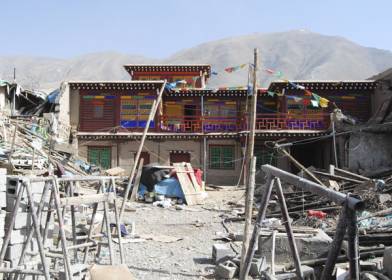 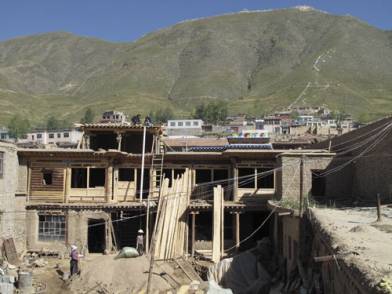 The Chatsongtsang (Ja tshong tshang) House in the small historic center of Jyekundo town (Jiegu, chin. Yushu) that was restored by THF in 2009 has survived the April 14 earthquake in Yushu Prefecture, Qinghai, China. It is a traditional mud-and-timber structure, typical for the region.
Contrary to many news reports, there were only less than two dozen traditional buildings of mud and timber remaining in Jyekundo. Many of these suffered only minor damage, and inhabitants of such buildings survived. The majority of collapsed buildings were built in a mixed style, with cement bricks and cement mortar, some mud bricks, some timber elements and some pre-fab concrete elements. This is important for the reconstruction of Jyekundo, and also for future building in earthquake-prone areas, as it shows that traditional Tibetan architecture can have important building principles to limit earthquake damage. A technical report on the restored house is available from THF on request.