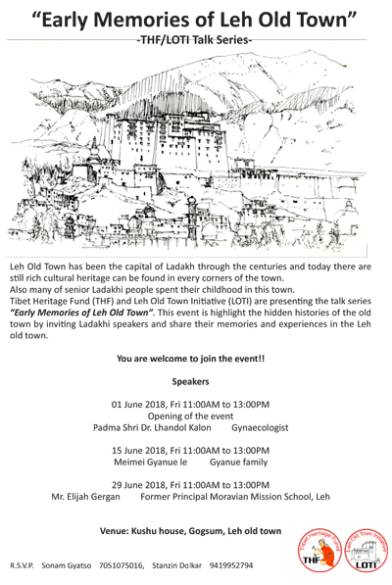 Due to the great success of the talk series in the Kushu house in 2017, in 2018 THF/LOTI organised eight talk events as part of the series ‘Early memories of Leh Old Town’. These events are part of our efforts to preserve the history and the living heritage of the old town. It is also aiming to keep the connection between past and present, bringing people from different generations and communities together. We hope to re-link, throughout these talks, the fading memories of Ladakh’s history and cultural heritage.
We invited prominent Ladakhi speakers to share their memories related to the old town and their lifetime stories. Students from different schools in Leh were invited and encouraged to participate in the talks, together with the general public. Throughout the events, we received 315 students from eight schools and over 80 people from the local communities as well as national and international visitors.
The ‘Early memories of Leh Old Town’ was published in the local magazine, and broadcast by All India Radio, Ladakh, and the local TV DD Kashmir, thus, our “Talk series” programme reached a wider public.

On June 1, Dr. Lhadol Kalon the first gynaecologist in Ladakh, shared her memories from her childhood as a member of the Kalon’s (minister’s) family. She talked about social etiquette learned in daily life, highlighting the importance of social interaction in maintaining the traditional culture of Ladakh’s.

On June 14, Mr. Elijah Gergan - Former Principal of the Moravian Mission School, Leh introduced his Christian family background and shared his life experience, having a culturally diverse background. He told, how he was born and raised in Ladakh, studied in Kashmir and how he became a teacher. Also, he emphasized his enjoyment of the great nature of Ladakh and told the students that there are a lot of things to learn from nature.

On June 29, Mr. Gram Mohamed Baldi - Former Officer of Agriculture Department, expressed how important it is to preserve Ladakh’s traditional culture and customs, which are disappearing. Based on his experiences he shared some of the advantages of traditional customs and practices, i.e. building traditions, food and costume.

On August 8, Mr. Abdul Ghani Sheik, Ladakhi historian and scholar, who has published numerous books and articles, talked about "Ghost stories from Leh old town". On this occasion he shared some of his collected ghost stories from the old town. These included some stories from a haunted house, a driver that gave a lift to a ghost, etc.

On August 17, Mr. Tsewang Dorjey Dongbos, Former Telshidar officer (land revenue officer) talked about his working years in Nubra Valley. He shared with the audience his memories of the arrival of the Uyghur traders from Yarkand, which he witnessed, and of the closing of the cross-borders trading, which came to an end in the 1960s. His talk was titled the "Caravan trade and Uyghur".

On August 31, Mr. Tsering Wangchuk Zamar, Teacher at Tibetan Children’s Village School, Ladakh spoke to the audience about his childhood in Ladakh, where he was born from Tibetan parents, and his youth spent in the old town of Leh with his Ladakhi friends. In his talk, he emphasized the importance of preserving everybody’s own tradition, which nurtures the cultural and ethnic identity. His talk was titled "Good old Leh from a Tibetan eyes".

On September 14, Mr. Tsering Dorjey Hanupa, a mason working in THF/LOTI from Hanu village in lower Ladakh, told stories about his cultural roots and myths of the Hanu people, who are said to be descendants of the Aryans. He shared his experience from when he was trained as a professional mason and craftsman and introduced some episodes behind the construction of 17th century Leh palace.

On October 12, Mr. Murup Namgail, Historian and Scholar, award winner of Padma Shri, shared many interesting stories about Leh old town. The history and events of each area from the old town were especially recounted and the outline of the historic Leh narrated. He included also early memories from his childhood, how he travelled from his village in Wangla to Leh along the trading route. His talk was titled "Early memories of the old town for one from Wanla".