Completion ceremony of the Central Asian Museum Leh
Posted by pimpim on 23 Nov 2020 at 8:12 AM 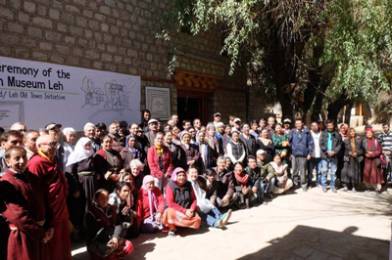 On 7th October 2015, THF/LOTI held the completion ceremony of the Central Asian Museum Leh complex. In the ceremony, we expressed heartfelt thanks to all the people involved in the project, from the ones who conceived the idea, provided the land, designed the museum, constructed the buildings, managed the progress and sponsored the project.
The representatives of the different communities, scholars, concerned parties and THF's international sponsors attended the ceremony. Mr. Saleem Beg chairman of National Monument Authority was the chief guest. During the ceremony, two minutes of silence were kept in memory of late André Alexander who conceived, designed and supervised the construction of the main museum building. Ladakh’s multi-ethnic community was very happy to have this museum and many community representatives and scholars expressed the importance of the museum where their culture and history can be presented, and where knowledge is imparted and education is delivered.
The ceremony was broadcast on the local TV station Doordarshan and the radio AIR, and also the articles were published in the newspaper Reach Ladakh. http://www.reachladakh.com/central-asian-museum-to-display-baltistan-ladakh-kashmir-tibet-artifacts/3042.html