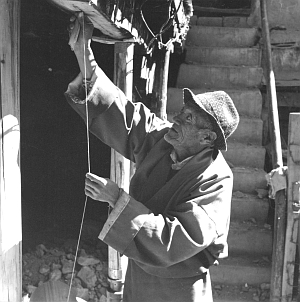 Motivated by seeing too many historic buildings in Lhasa's old town disappear, Andre Alexander and Andrew Brannan launched the Lhasa Archive Project in 1993 with the aim to document Lhasa's vernacular architecture. They were soon joined by artist Pimpim de Azevedo, who drew a beautiful map of 1948 Lhasa based on Alexander's research. Alexander and Azevedo then became acquainted with old craftsmen in Lhasa, who taught them traditional building skills (thanks to Pala Migmar, Jampa Kelsang, Olo Chunchun and Choetshok). 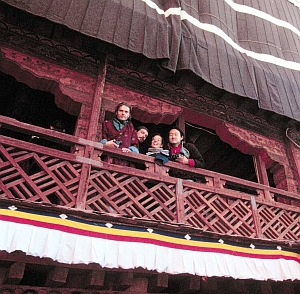 In 1996 Alexander and Azevedo founded Tibet Heritage Fund in Lhasa with important contributions from Heather Stoddard and Enrico Dell' Angelo, as well as the encouragement of several Lhasa municipal departments and individuals. The Lhasa Old Town Conservation Project quickly halted further demolition of historic buildings, and together with the Lhasa City Cultural Relics Office the eastern part of Lhasa's central Barkor neighbourhood was rehabilitated.

Until the end of the project in the year 2000, 20 buildings were upgraded, 93 were listed a protected buildings and 300 artisans were trained. Since then THF has moved on and today is an established cooperation partner in several Asian countries. The team have jointly authored a number of publications about traditional Tibetan, Chinese and Mongolian architecture. Pimpim de Azevedo recently spent a lot of time in Mongolia, and is also working on a new book. Andre Alexander occasionally teaches courses about traditional Tibetan architecture at Berlin University of Technology, in-between living at project sites in the Himalayas and building a museum in Ladakh. Japanese architect Yutaka Hirako is picking up the different Tibetan dialects and songs that go along, while also managing projects in Tibetan areas and old Beijing.

In January 2012, Andre Alexander passed away suddenly, a terrible shock for his family and friends, and the THF team.  Pimpim de Azevedo, Yutaka Hirako and Sylvester Kaben made the commitment to continue with THF work. Yutaka took charge of THF projects in Sikkim and Ladakh, completed the Central Asian Museum, Leh complex, and continued with the restoration and rehabilitation of vernacular architecture, temples and monuments in Ladakh. Meanwhile, THF pushed for the creation of a Heritage Zone, and proposed guidelines for its protection.
Pimpim coordinated a team to prepare the publication of Andre’s book “The Lhasa House”, the second volume of the THF conservation inventory, and worked on the Ladakh projects alongside Yutaka, designing and planning the Artisans, Artists and Architects House in Ladakh for the preservation of traditional crafts and knowledge.
In 2021, THF will celebrate 25 years of working for Tibetan and Himalayan architecture and heritage.