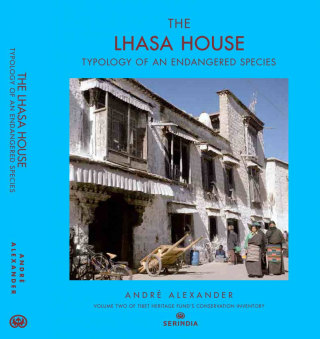 The Lhasa House - Typology of an Endangered Species

Price: $95
Description: The Lhasa House is a comprehensive survey
of the architecture of the Tibetan capital,
Lhasa, based on the Tibet Heritage Fund’s
official five-year conservation project in Tibet,
during which the author and his team
had extensive access to the buildings studied.
The companion volume of The Temples of
Lhasa (Serindia 2005), this book is concerned
with the traditional vernacular architecture,
in the form of the historic Lhasa town
house, as it was built and lived in from the
mid-17th to the mid-20th centuries. According
to the earliest proper survey of the city,
Lhasa in 1948 consisted of around 700
traditional Tibetan town houses, a small city
by any standards. In 1993, little more than
300 of these remained. By January 2010,
this had dwindled to less than 100.
The most detailed documentation of its kind
yet published, this book aims to define the
Lhasa house as a distinct variety of traditional
Tibetan architecture, by providing a
technical analysis, discussion of the cultural
framework and the development of a typology.
The core of the work (chapter 5) presents
architectural surveys (collected with the
help of many others), photographs, maps
and descriptions of 127 historic residential
buildings, arranged by type, data compiled
with some urgency during the demolition
and rebuilding of the old city in the 1990s.
https://serindia.com/products/the-lhasa-house-typology-of-an-endangered-species
[Back]
Copyright, Tibet Heritage Fund